Cyclists need to carry stuff. Now just what kind, shape, and volume of “stuff” is needing to be carried varies greatly. Thus, we as cyclists have everything from jersey pockets to cargo bikes to choose from to carry “the stuff”. Let’s say that you are a self-sufficient, adventurous type of cyclist with a minimalist bent. Perhaps this tidy bag from Spurcycle might be of interest to you.

What It Is: First of all, Spurcycle doesn’t try to use a clever, pretentious name for this product and simply calls it what it is: a saddle bag. That should give you a good idea of what the intentions for the product are. That said, it isn’t a bike packing saddle bag, it is a minimalist bag. One you might use on an afternoon jaunt, or in an event with aid stations, where you can cut down on your kit to just carrying the bare essentials.

The Saddle Bag measures out to be 12.5cm X 18cm X 6cm. That’s about the size of an original Walkman cassette player, as I recall, but that’s probably an irrelevant comparison these days.  Anyway…… It isn’t a big bag, not by any stretch. It’s made out of X-Pac VX42 fabric and weighs 47 grams. It features a single hook and loop closure which doubles as a way to attach it to your saddle rails.

The Spurcycle Saddle Bag goes for $45.00 USD and is available direct from the Spurcycle webpage here.

Ride Performance: Before I get too far into what I think about this particular bag, I will give my opinions on this sort of carrying option in general. I’ve used several “home brew”, old school, and modern takes on the minimalist saddle bag or “tool roll”.

In my experience, many of these minimalist solutions are fine in theory, but fail in practice. I’ve lost a few sets of tools and tubes as a result of poor attachment systems that were not really good for anything but smoother paved rides and coffee shop runs. So, I tend to be very skeptical when presented with another of these types of bags.

Okay, so I got this bag, loaded it up, and tried to get it to look all “pro” with the Spurcycle tab out and all. I ended up just passing on that, since my selections for tools and tubes weren’t compatible with “the perfect look”. Oh well…… What matters is that it functions.  I put the following articles into it as you see the Saddle Bag pictured above:

That was all. Yep! That maxed out the capacity of this bag, in my view. Now, on to the riding…… 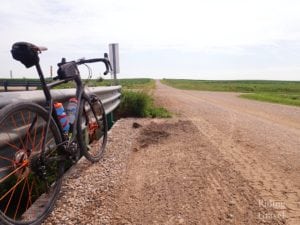 I used this bag on a handful of test rides on the Jamis Renegade Elite running anywhere from 25-50 plus miles per ride. I found that occasionally I had to re-strap the bag. Not because the hook and loop closure was weak, on the contrary! That higher end version of the classic closure material is really pretty stout stuff. The issue is that Spurcycle chose to offset the strap towards one end of the bag. My load kept wanting to squeeze out, no matter how I oriented it, from the strap. It never did do this fully, but…….

At The Finish: I’m still pretty skeptical about this kind of bag and it holding on without constant checking and re-strapping. Especially on longer rides. Spurcycle reportedly did a lot of ride testing before production of this bag and the final product was the result. They had no trouble with the single strap system. Give me a hook and loop strap to loop around the seat post and I’d feel a whole lot better about this bag.

But that said, this is one of the more elegant solutions for those who do have confidence in this sort of bag for carrying a minimal amount of stuff. It kept the contents from vibrating against themselves and dust free to boot. It’s made in the USA, so if that tickles your fancy, there is that to love about it as well. I was not convinced that I couldn’t lose it, so for me, I probably won’t be relying on this bag as a standalone bag attached to my saddle rails only. I could see it used as a sub-bag, an additional attached bag to a seat pack, or thrown inside a frame bag when bike packing.

If Spurcycle gave me the option of a loop on one end which I could thread a separate strap through and attach that to my seat post, well then I’d be all over this kind of minimalist seat bag.  Maybe your gravel isn’t as rough? This could work for you, perhaps. I really like the simplicity of attachment and the design is simple and light. So, I will go on record that this bag is the best minimalist bag/tool roll I’ve tried yet, but I still feel like I had to check on it during rougher gravel travel.

NOTE: The Spurcycle Seat Bag was sent over to RidingGravel.com for test and review at no charge. We were not paid nor bribed for this review and we strive to give our honest thoughts and opinions throughout.