The seasons are changing, but thanks to the climatic swings of late, I have been able to sneak in rides with the Bont Vaypor G shoes anyway. These are definitely not cold weather shoes! That said, if you haven’t seen the introduction to this review, please check that out here . There you will learn the technical features of the Vaypor G shoe. Now here are my impressions after having used these shoes for about three weeks now. 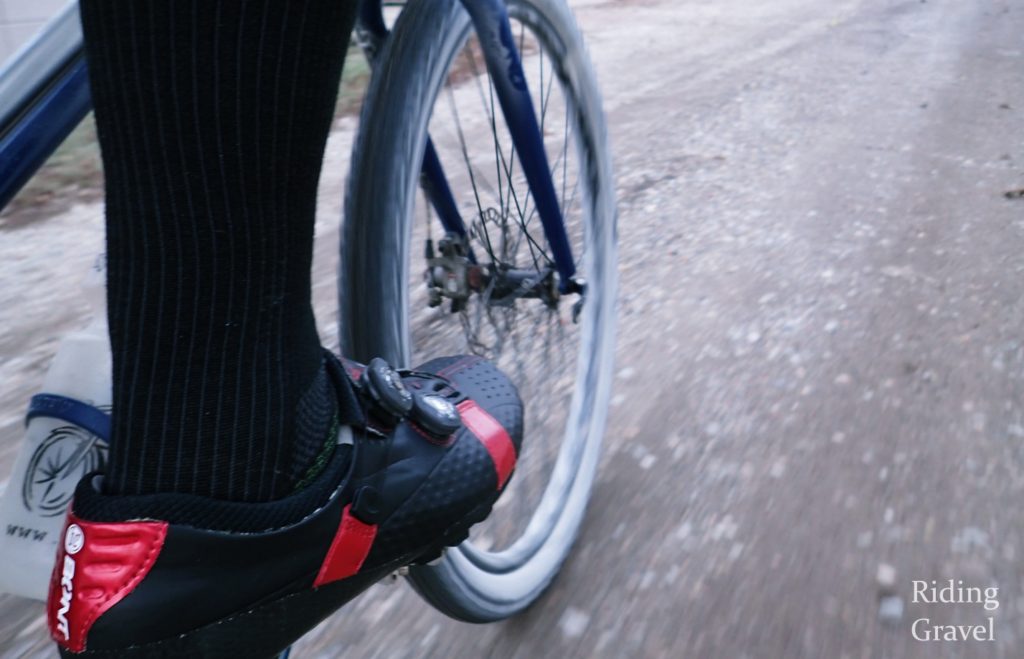 I mentioned in the first post on these shoes, in my ride impressions, that the shoe gave me the sensation that I was applying power through various parts of the shoe, not just on the foot bed. I have since come to realize that because of Bont’s attention to heel cup design, I actually am powering through the bottom part of the stroke with the heel cup.  Of course, having the shoe fit so well makes this a possibility also. 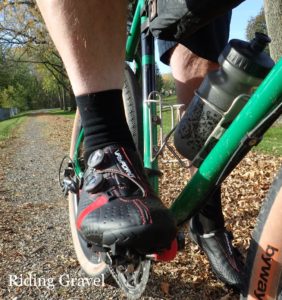 Those Boa knobs are really easy to adjust while riding.

Furthermore; the Boa system on the shoes really does allow fine tuning the fit on the fly. The reason the left shoe’s Boa knob turns the opposite way from the right shoe’s knob for tightening becomes obvious when you ride. It is because this is the most natural feel for the rider. I found myself adjusting the knobs more often than I thought I might during riding. It makes a tremendous difference in efficiency and comfort when you can tighten or loosen the shoes even slightly. I was surprised how such minute adjustments made such big differences in this regard.

Long rides were where the micro-adjustability of the shoe was really important. If my feet got tingly or sore, I could back off the knobs a couple detents and recover quickly. If I found my foot moving around too much within the shoe, I could adjust that out while riding. I am constantly amazed at how a shoe that feels good and snug at the start of a ride can end up becoming too loose or too tight later into that ride. While buckle systems can certainly be adjusted similarly, my experience is that this adjustment is more difficult to execute while riding. Strap type closures even more so. The Boa is best, in my opinion, since it is dead simple to execute the change and the finer adjustments are more effective as well.

The “hot spot” issues some have with stiff shoes has not been an issue for me with the Bont Vaypor G. I feel that since my feet are so well supported, and that I can use so much more of the shoe to power the bicycle, hot spot issues most likely will be a non-factor here. The “bath tub” construction of the foot bed and the anatomical shape seem to be factors as to why this is as well. Bont’s claim that they build these shoes on a last that is different than other company’s lasts is apparent the minute you look at the shoe, but it is not until you wear them that this manifests itself in comfort.

Which brings me to walking in these shoes. As I have mentioned, it isn’t what Bont was concerned with when they designed the Vaypor G, (or any of their line), but I decided that a test of walking the bike on dirt was necessary. This happens quite often at gravel events. So, I found a dirt road which was featuring some moist dirt, mud, and softer sections. Places one might be forced to walk a bike during an event. I hoisted my bike up on my shoulder and marched. While The Vaypor G isn’t the most comfortable shoe in these situations I have used, it isn’t nearly as bad as I thought it would be. Obviously, softer grounds will mitigate the “slab on your foot” feeling the Vaypor G has on pavement. So, I give the Bont Vaypor G a passing grade here. Just know that harder surfaces will probably come with more discomfort if you have to walk very far in them.

So Far….. The Bont Vaypor G is a shoe for the high performance minded rider that is looking for efficiency but not at the cost of on-bike comfort. That said, don’t think about walk-ability when looking at these shoes. Bont is unapologetic in saying that the Vaypor G is not for such pursuits. These shoes are made for riding bicycles. That said, walking on soft dirt or mud- likely places where a gravel racer might have to hike-a-bike, isn’t a terrible experience. They are heat moldable, but fit so well that you may not have to use this feature. Boa closures afford an adjustable fit while riding. Stay tuned for my “At The Finish” verdict on these Bont Vaypor G shoes which may come sooner than later depending upon when Winter decides to show up here.

Note: Bont sent the Vaypor G to RidingGravel.com for test and review at no charge. We are not being charged nor bribed for this review and we will strive to give our honest thoughts and opinions throughout.