Donnelly MSO 650B x 50mm Tires: Getting Rolling – by Grannygear

Many gravel bikes in this day and age are coming from the factory set up to run both 700c and 650b wheel sizes. Typically the smaller wheel allows for at least a 47mm tire to fit in there and more commonly, like the new V4 Warbird that Salsa just rolled out, they will handle up to a 2.0/2.1 27.5/650B tire.

That dual wheel option adds quite a bit of versatility to the bike. One of the reasons I swapped my older Warbird for the Lynskey GR 250 was the ability to run that smaller wheel-bigger tire combo. But I have not done that very often. After riding these new tires, the Donnelly X’Plor MSO, I am thinking I have been missing out.

Set the WAYBAC machine to a year or so ago. I was riding a set of WTB Nanos in the 650bX2.1” size on the new-to-me Lynsey GR250 when I pointed the bike at a particularly nasty rise in the dirt road I was on. Deeply rutted from 4×4 traffic after some heavy rains, what parts of the road that were not dried, clay waves of hardened dirt, were pools of muddy water and exposed baby head rocks.

Up I went with very little drama. Well, that was fun! The extra drag of the bigger tire on the paved climb that got me here was soon forgotten as the rest of the ride was a revelation of, to quote Tigger, “bouncy, trouncy, fun”. The bigger casing of the 2.1 and the more aggressive tread allowed me to ride the bike more like a mountain bike of old with no suspension and narrow, oddly shaped bars!

But the Nanos were not tubeless ready in that size (what is up with that WTB?) and I never ran them again. So yes, I have dabbled with the 47mm size in 650B, but I had not revisited the 50mm (2.0/2.1) size till now. Recently I was chatting with Guitar Ted and mentioned I was thinking of revisiting a smaller diameter but poofier 50mm tire but was not sure what was out there. He mentioned the Donnelly X’plor MSO in that size and after an email or two, I had a set in the bag.

What It Is: When I got them out of that bag, I picked up one of the tires to unwrap it and thought, “Heavy critter!”. I unfolded it and noted the casing, with what felt like a good bit of rubber in it, allowed it to stand upright without collapsing, something most tires will not do. On the kitchen scale of truth and justice, I weighed them at 661g and 662g. Ouch! I had to look up the 700×42 Resolutes in my notes and realized I was adding about 200g each tire in rolling weight. The 650B wheels I would be using were about the same weight as the 700c ones, so no savings there to offset things.

Hmmmm…how to put this in perspective? Well, a bit of googling showed that the WTB Race Nanos in this size were the same weight as the X’Plor, so that was interesting. As well, when you read the ad copy for the X’Plor MSO tire, you see this:

The X’Plor MSO is an tubeless-ready adventure tire designed for the most ambitious adventures. The combination of smooth-rolling center knobs and aggressive shoulder lugs provide great traction and durability for gravel roads, trails, urban assault and even pavement.
The MSO tire is named for the airport code of Missoula, Montana, home of the Adventure Cycling Association. Donnelly’s X’Plor adventure tire series is designed to bridge the gap between pavement and blazing your own trail. Each tire within this series is designed for multiple conditions from off-road touring, to gravel racing, to just getting outta’ Dodge. 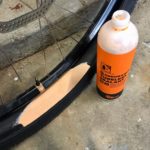 So if we keep this in mind, the burly feeling casing of the X’Plor makes sense. Light weight tires come at a cost and that cost if often played out in trail side tire repairs and costly replacements. The tread pattern is interesting with not much in the way of blocks or gaps, but rather a close pattern of mini teardrop shaped knobs set into a semi-chevron pattern and with a decent center ridge effect. It looks like a fast, smooth rolling tire.

With a slosh of Orange Seal Endurance formula, the X’Plor MSO tires set up with a floor pump on the WTB KOM 21 rims. Nice. They have not weeped one tiny bit since then, showing another good thing about a casing with more rubber in it.

I have had many rides now over varied but typical So Cal conditions. Much more on that later, but I have found that the X’Plor MSO tires have been a real blast to use and I look forward to many more rides on them. Next post we will start to unpack that as I head to the rugged jeep roads of some high mountains near me, a perfect proving ground for a “tubeless ready adventure tire”.

I will also be thinking out loud about the pros and cons of this wheel and tire size as compared to my normal 700X42mm set-up, as I have been flip-flopping back and forth a bit depending on the ride I am doing. Would I convert full time to 650BX50?

More on that as we go.

Editors Note: Yes, there is a 700c X 50 MSO as well which RidingGravel reviewed here.

Note: Donnelly sent over the 650B X 50mm MSO model tires for test and review at no charge to RidingGravel.com. We were not bribed nor paid for this review and we will always strive to give our honest thoughts and opinions throughout.