Editor’s Note: We at Riding Gravel are pleased to present another post  from our contributor, John Ingham

When a former colleague asked me what I had been doing in retirement, I confessed to cycling and racing on gravel roads. He replied, “Sounds terrible!” He imagined, I suppose, bone-rattling vibration and excoriating crashes. It was a brief encounter, not a conversation, so in self-defense I merely said I was having fun. He seemed unconvinced.

In fact, gravel is not always rough going, and with fewer cars and trucks to worry about, it is probably safer than my colleague’s road biking, flesh abrading surfaces not withstanding. In some respects, it may be better exercise as well. Studies suggest that training is more effective with vibration.1 Heart rate, breathing and oxygen uptake, lactate build up, and perceived effort all accelerate more rapidly when strength training and aerobic cycling are performed with vibration.2 Among older people, exercise with vibration may be more effective than exercise alone in preventing sarcopenia and osteoporosis.3

My colleague’s gut reaction may be partly right, however. The news about vibration is not all good. As workplace studies show, chronic hand-arm vibration and whole body vibration can have adverse health consequences. Hand-arm vibration can lead to HAVS (Hand-Arm Vibration Syndrome), a form of Reynaud’s disease. The symptoms can include attacks of whitening of fingers during exposure to cold, tingling and feeling loss in fingers, pain, and weakening grip strength. Intense or chronic vibration damages nerves, including nerves that regulate blood flow (thus the vasospasms and blanching), a scenario that can be made worse by cold temperatures. Whole body vibration is associated with gastrointestinal disorders, spinal and back muscle problems, and circulatory disorders. Usually, HAVS and whole body vibration problems develop gradually, so permanent injury is not apparent at first.

When “hero gravel” turns to coarse gravel and washboards, vibration in gravel riding can become intense, quite literally, a pain in the butt. It increases the likelihood of numb hands and aching arms, shoulders, and necks. Given the workplace studies, we should probably not assume that numbness, aches, and pains are harmless. I finished the last ten miles of the 2015 Heck of the North in falling temperatures and near total darkness, unable with my cheapo bike light to avoid the worst rocks and ruts. At the finish, my hands were numb and cold. My index fingertips remained anesthetized for several months, and two years later I have mild HAVS. Cold and vibration harmed my fingers during the Heck, but given how HAVS usually takes years to develop, I suspect my history of trail cycling, rock climbing and mountaineering (the pressure on fingertips can be intense), and many cold-hands ski days played a part as well.

Along with causing discomfort, vibration saps our energy and wears us down during long rides. A Swedish study of eight males found that vibration applied through the pedals reduced their endurance on stationary bikes by 21%.4 More fatigue and less endurance translate to lower average miles per hour. To mitigate vibration, many gravel riders and racers invest in gravel bikes and/or add-ons, including carbon seat posts and handlebars, thicker bar tape, leather cycling gloves, well-padded bibs, high thread count tires, bigger tires, carbon wheels, and pricey saddles. Vibration-related pain and fatigue often persist nonetheless. During the 2015 Heck I was riding a Salsa Fargo 2 with 2.25-inch tires and a double-wrapped handlebar, a relatively comfortable setup for the Heck, but I suffered anyway. Last spring I purchased a carbon Salsa Warbird, a bike that was engineered to reduce vibration and maximize speed on gravel roads.

The Warbird was a significant improvement for sure but numb hands and upper body tension were still concerning on long rides, so, after reading Guitar Ted’s reviews of the Redshift ShockStop stem and the Cirrus Cycles Body Float seat post (now rebranded as the Kinekt Isolation Seat Post), I ordered them up and replaced the stock stem and seat post. I am glad I did. My experience agrees completely with Guitar Ted’s positive evaluations. Indeed, on most gravel roads the ride is almost silky smooth. Potholes can still sting and deep washboards can still rattle, but less than before. There is much less hand numbness and upper body tension, and saddle sores seem to be a thing of the past. I am no longer concerned about aggravating the HAVS. My customized Warbird is now one sweet bike.

The Body Float and ShockStop are cleverly engineered and well made. The verdict in online comments seems to be that the Body Float out performs the Thudbuster ST and carbon seat posts hands down. As Guitar Ted observes, the Redshift stem is a huge improvement over earlier attempts to put vibration dampening in handlebar stems; it reduces typical gravel vibration nicely and is only slightly bigger and heavier than standard stems. The ShockStop and Body Float cost $140 and $250 respectively, pricey but much less than some combinations of the aforementioned add-ons and arguably far more effective.

In addition to being more comfortable, it seems like I have been going faster. For what it is worth, I have had a personal best on a 40-mile training route and my two best races in three years of gravel riding. Gravel racers who spend big bucks for lighter frames and components in the hope of accelerating and climbing faster might balk at the added weight of the Body Float and the ShockStop (together, about twelve ounces).5 But let’s be honest. We can be unrealistic, even superstitious, when it comes to spending on lighter gear in the hope of going faster. In The Rider, Tim Krabbé recounts how Jacques Anquetil, the winner of five Tour de France races, would transfer his bidon from its holder to his rear pocket before climbs. When asked about this curious habit, Anquetil explained that a lighter bike climbs faster! Spending hefty sums on carbon to shave a few ounces makes sense for the pros, but it seems only marginally more rational than Anquetil’s water bottle trick for the rest of us. Truly effective vibration reduction might be a better strategy for moving up the lists of finishers than small weight reductions.6 It might even be a better strategy for top competitors, at least in gravel racing.

There are several reasons why one can expect to average higher speeds over long distances with the Redshift and Cirrus Cycles devices: 1) by supporting more secure and continuous contact with the bike, they make it easier to keep hammering on rough terrain; 2) they enhance stability and thus allow faster turns; and 3) by dramatically reducing vibration, they increase staying power. We might, then, expect the Redshift stem and Cirrus Cycles seat post to catch on among top racers despite the weight penalty. Adam Bergman, winner of the 2016 Almanzo 100, is constantly looking for advantages in equipment, from aerobars, to skinsuits, to helmet and shoe covers, to 1X. In Nick Legan’s Gravel Cycling,7 Adam says this: “One equipment choice I would like to try would be a Cirrus Cycles BodyFloat suspension seatpost. I could see that being a big advantage in efficiency and reducing body pain.” Adam’s rivals may want to take note. Staying with him is difficult enough as it is.

4 Samuelson, B., L. Jorfeldt, &amp; B. Ahlborg. 1989. Influence of Vibration on Work Performance During Ergometer Cycling. Upsala Journal of Medical Sciences 94(1):73-9.
5 The Redshift ShockStop comes in different lengths, and the Cirrus Cycles offers a Body Float with a slightly lighter carbon post.
6 Weight reductions in pounds, of course, are another story, but shedding body fat is another option, and a whole lot less expensive than carbon.
7 See Guitar Ted’s review in RidingGravel.Com. 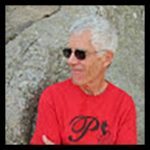 About The Author: John Ingham is Professor Emeritus of Anthropology at the University of Minnesota. He rode a hybrid bike on trails for years. When he retired in 2011, he renewed his earlier passions for rock climbing, mountaineering, and back packing and began doing longer rides. He has been gravel racing for three years and has completed various races, including the Heck of the North, the Almanzo 100, and the Dirty Lemming 100. Now 77, he appears to be the oldest rider in Minnesota completing major gravel races.