When it comes to upgrading your bicycle, nothing has a bigger impact upon ride feel and performance than wheels. Okay……..maybe tires are a bigger influence. We can debate that later, but it cannot be denied that wheels are important and really great wheels are something that makes your riding experience better. It is definitely something you can feel, but using a 30 gram lighter seat post or stem? Meh! Maybe not a big deal. But wheels, oh yeah! Wheels can make a big impact on your ride. In this post we want to introduce you to a company you probably haven’t heard of, but makes wheels you have heard of under other brand names. Irwin Cycling is their name and the wheels we have here are their new Aon GX 35 650B wheels.

Who Are These Guys? In today’s modern economy, it seems that almost anyone with too much money and an idea can become a company. However; Irwin Cycling is definitely not one of those companies. They got their start 30 years ago or so providing OEM wheels for motorcycle manufacturers. Then the bicycling business took off in their home country of Taiwan and they moved into providing wheels, sourcing of components, and manufacture of bicycles. Irwin Cycling is still a family business now and is still doing work for many companies you may have heard of, but now they want to branch out as their own brand. Since 2014 that is exactly what they have done with wheels. Their connectedness within the industry has allowed Irwin Cycling to be able to design and manufacture their own carbon rims and hubs, controlling processes, and even do their own, in-house testing. This is definitely a company to be reckoned with. 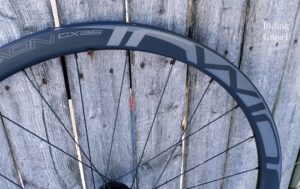 What It Is: The wheels Riding Gravel has on test are brand new model 650B carbon wheels dubbed the Aon GX 35. These are so new they are the first examples to be ridden and reviewed out in “the wild”. These wheels feature a carbon fiber, tubeless ready rim design which has an aero profile that is sort of a “deep U” shape. The dimensions of the rim are as follows: 35mm deep, Outer rim dimension is 30mm, and the inner rim dimension is 24mm. 24 is also the number of spokes in each wheel which are laced 2X.

The hubs are Centerlock disc standard and are Irwin’s own “6-48” design featuring six pawls, three which are engaged at any one time, each with three “teeth” each which engage on a 48 tooth drive ring. Irwin says this hub has 3.75° of engagement. All I can say is that feel of the engagement is on par with any high end hub out there.

Irwin also claims that they have optimized the hub flange spacing, size, and canted the flanges to provide even spoke tensions, stiff wheels, and longer service life for the spokes. At the rim Irwin have molded the spoke holes and use nipples which promote the spokes leaving the rims at proper angles  The spokes do not leave the rim straight out which would create undue stress on the spokes and promote premature spoke failures. Spokes are traditional, Sapim “J” bend type spokes which should allow for easy repair should the need arise at almost any full service bike shop.  Irwin prides itself on precise, hand built wheels with very even spoke tensions, so I have high expectations here. 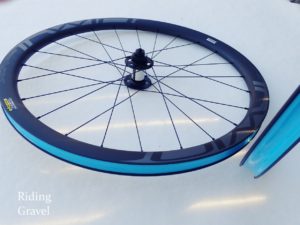 The rims came pre-taped with blue, tubeless ready tape. The wheels ship with a set of extra long, aluminum alloy tubeless valve stems with removable cores so turning the Aon GX 35’s into tubeless wheels with my Terrene Elwood 650B x 47mm tires was a snap. Literally. The beads seat with a loud “snap!” when airing up these, which was simple and only required a floor pump with this rim and tire combination. But before I get too far ahead of myself here, I should say that these wheels are very light. The weights were as follows: Front 680 gm and Rear 790 gm. The Centerlock converter pieces to allow for the use of six bolt rotors are provided with the wheels and those weigh 34 gm each, including the lock ring. I should also mention that Irwin includes end caps for 12mm and 15mm through axle front hub set ups along with 12mm 142 end caps for through axle rear ends. QR skewers are also included with the wheels. Since I am mounting these on my 2014 Raleigh Tamland Two, I will be using the QR skewers.

First Impressions: The wheels set up tubeless easily, as I have already let on, and they have been holding air very well. The precise valve hole molding and the valve itself can form a really good seal and Irwin’s precision in molding the bead shelf on the rim also has aided in the excellent air retention. (Note- These tires had been previously used tubeless and so the casings are already plugged up pretty well) Mounting the rotors was a bit confusing at first since Irwin uses a clever grub screw arrangement to locate the rotor against the six bolt adapter, which is then held in place by the lock ring. The little grub screws have to be inserted one way because if you do it the opposite way the fatter end of the screws won’t allow the rotor to sit down around the screws. I’ve been assured that Irwin will include clearer directions for this procedure in their otherwise excellent set of instructions which comes with the wheels in future editions of the manual.

The wheels fit right into the frame as expected and even the brakes did not need adjusting. The wheels give the tires a decidedly different profile with their three millimeter wider inner dimension than the previous 650B wheel I was using had. The tire casing has flattened out a bit, so that will be interesting to see how it changes the feelings I am familiar with regarding the 650B tires I have used.

I was only able to make a couple short, in town jaunts with the new Irwin Cycling wheels due to lingering snow and ice here, but what I felt so far was a definite “snap” to acceleration and the feel of the accelerations I made was making the Tamland’s steel feel more like carbon fiber in terms of responsiveness. Obviously, I also made the bike lighter with the switch, which also contributed to this feel. By the way, all those teeth and pawls were not making any annoying buzz sounds as with other hubs that use similar high engagement internals. So, if you don’t like loud free wheel noses, this hub shouldn’t bother you.

So Far…. The Irwin Cycles Aon GX 35 650B wheels are lightweight, but the details are as impressive, if not more so, than the lack of mass here. The hubs are very nice, engagement is fast, and they are not very loud when coasting. The carbon rims are right in the pocket for internal width and set up tubeless very nicely with the pre-taped rims and included valve stems. Also included are all the end caps and quick releases making these wheels “future proofed”.

Stay tuned for the “Checkpoint” post where I should have ridden these wheels quite a bit and will be able to give my thoughts on ride performance in that post.

Note: Irwin Cycles sent over the Carbon Aon GX 35 wheels for test and review at no charge to Riding Gravel. We are not being paid nor bribed for this review and we will try to give our honest thoughts and opinions throughout.