Posted in Components, Reviews, Wheels
Guitar Ted  November 28, 2018  1 Comment
Rolf Prima Hyalite Wheels: At The Finish – by Grannygear
I have had the Rolf Prima wheels underneath me for many hours of riding now and it’s time to wrap up the review. To catch up with my previous thoughts, see the Rolf Prima Hyalite: Checkpoint post.
First, let’s talk about the cost vs. value.  The retail on these wheels is $1200.00.  That is not cheap and I say that to acknowledge the mindset that says an aluminum wheel should not cost this much. “After all”, you may say, “I can have an imported carbon wheel at this cost. Perhaps even one by Bontrager or Roval”. But is that true? Let’s look at this a bit. First you have to consider the hub quality.  You will not likely get this level of hub in a carbon pre-built wheel for 1200 clams.  You might get a very nice hub, like one with DT Swiss 350 innards, and that is not ‘hay’, but not with a Ti free hub and the nearly Swiss Watch feeling these have.  White Industries makes some top level stuff. 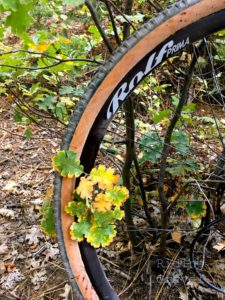 The hand build process is impressive too, but other wheels in carbon at this price are likely hand built or at least hand tensioned.
Typically we look at carbon as a way to shave weight, but at 1550-ish grams rolling, the Rolf Prima Hyalites we have are in that same gram zone as a typical carbon wheel beefy enough for gravel (at least at that price and a good bit beyond).
So then, what about stiffness?  Quite probably a carbon rim would be stiffer but how stiff does it need to be?  Stiffer in what way?  Laterally, these seem very good and the spoke design seems to transfer power with no hint of the softness you would feel if the wheel was winding up.  You can have a carbon wheel feel soft when you drive it hard if it is not built well.  I say they are stiff enough unless you are really a brute.
Aero, perhaps?  No, not really, at least not in the rim shape of the Hyalites.  I really have no way of knowing what the Rolf paired spoking design is doing in that regard, although I would not be surprised to find it pretty good in that way.  I think carbon does offer more in that regard. More aero benefits when you begin to get beyond a 30mm rim height.  There aluminum begins to get a bit portly, and while that rolling weight might not matter much for a TT bike, I think I would like to keep my gravel wheels as light as makes sense.
The sexy rating?  Carbon wins here. Just the word ‘carbon’ seems to increase street cred.  Or gravel cred, if you like.
If I were going to be really beating on a wheel off road, like in some bikepacking or trail riding sense, I think I would accept some extra weight over these wheels so as to have more beef in there, but that might be of less benefit than I would expect, after all I have not bent these yet.  At my weight, could I be better off on a thicker walled carbon rim, like one with no rim bead and a heavy sidewall?  Perhaps yes, perhaps no. 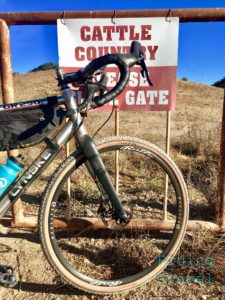 Still, I am impressed with the Hyalites.  I certainly think they are fine, fine, gravel road wheels in a pure gravel sense.  And if I were looking for a wheel for my all-road bike, something running 30s or 32s, or up to what ever fits in the frame, these would be stunners. They would be fast and responsive on the road and not even break a sweat when you made a hard right turn off the pavement.
In the end I have to say I am quite taken by these odd looking wheels.  In speaking to a few people who have been around a while in this cycling thing, they seem to echo that it is a long lasting product and seems to have a loyal following.  I will be finding out as I am buying these from Rolf Prima…too good not too.  There is a project on the radar that these will fit very nicely into…*cough…Warbird…V4…cough*.  We shall see.
Aluminum still has a lot to offer in a good, or in this case, a great, gravel bike wheel and despite carbon’s march to the sea of value VS. weight, etc, the Rolf Prima Hyalite makes a decent argument for a metal option in wheels.
NOTE: The Rolf Prima Hyalite wheels were sent over to Riding Gravel for test and review at no cost. We were not bribed, nor paid for this review and we strive to give our honest thoughts and opinions throughout.

About The Author: Grannygear hails from SoCal and spent most of his cycling days as a mountain biker from the formative years of mountain biking all the way up to the present day. His day job is in the tech sector, but he has spent time writing about off road 4X4’s, 29″ mountain bikes, and cycling in general. Grannygear and Guitar Ted have worked off and on together since 2009 after a chance meeting at Interbike. With gravel cycling on the rise, Grannygear has been exploring how this genre’ works in SoCal and now does guest pieces for RidingGravel.com in his spare time.
Share:

1 thought on “Rolf Prima Hyalite Wheels: At The Finish”