Michelin is no stranger to bicycle tires, yet they seemed to sit on the sidelines while several other manufacturers jumped in with gravel oriented offerings. Michelin is a big company, and generally speaking, bigger companies wait until “the numbers make sense” before they offer new categories of product. Michelin is no different. However; they have jumped in, their offering is dubbed the “Power Gravel”, and it comes in a cyclo cross friendly 33mm size along with 35mm and 40mm sizes.

For this review, I welcomed in N.Y. Roll, a local rider and someone who is a big fan of gravel riding. N.Y. Roll has competed in several gravel events in the area and also leads a beginner’s gravel road group ride every week. We will get his perspective on this new offering as well. He is riding the 35mm versions while I’ll be on the 40’s. Before we get into our thoughts though, let’s take a look at what we have here….. 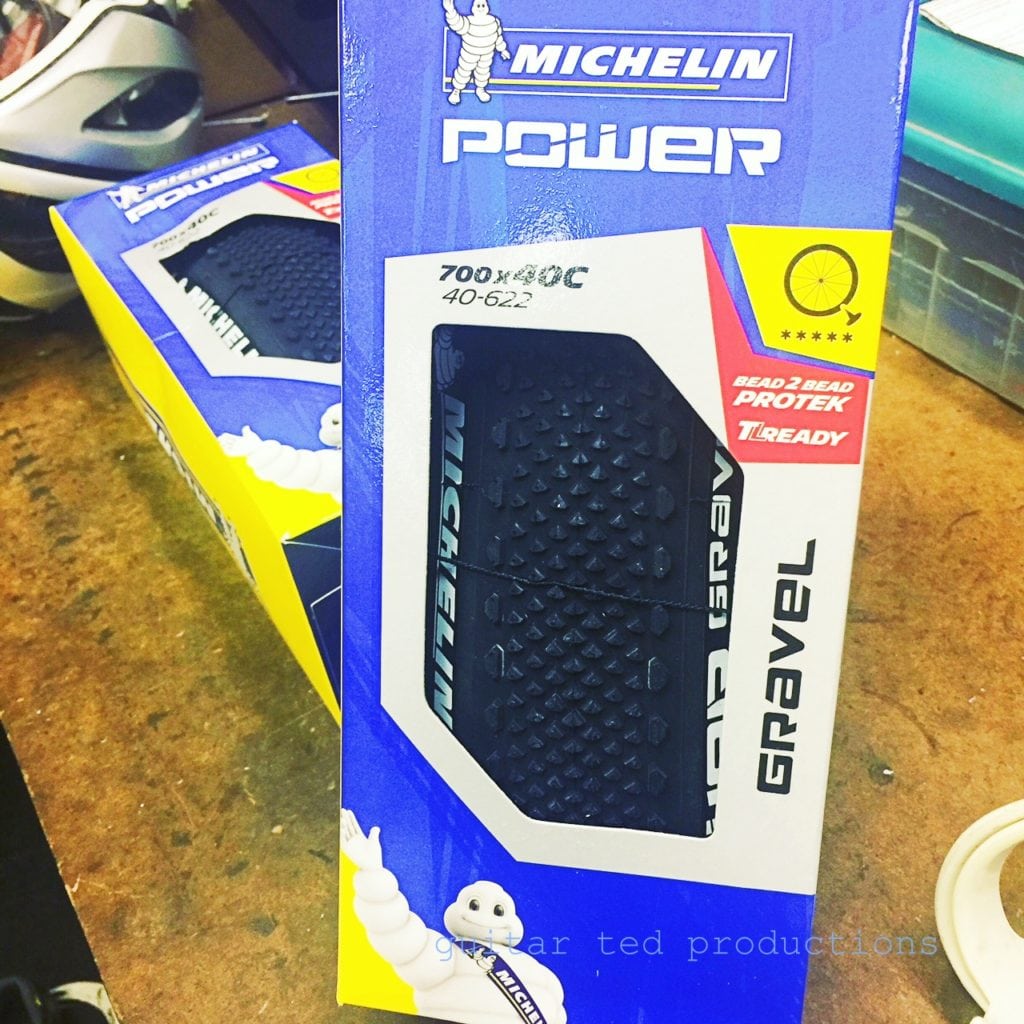 What It Is: The Power Gravel models both share several features. Following is a list and description for each-

The Power Gravel tires use the tried and true “low center knob-taller lateral side knob” formula. Several companies offer  variations on this theme to riders. N.Y. Roll mentioned it as well by saying”…. it just screams what I want in a gravel tire, low center tread and high tread on the sides.”

The tread blocks are an arrangement of several tiny triangular knobs in a chevron pattern across the face of the casing. The side knobs, (actually no taller than the center blocks), are kind of squashed hexagonal shapes which form a sort of lateral side knob. The Protek layer can be felt. N.Y. Roll mentions, “From the touch of the tire the center feels nice and reinforced as described by the product description. It did not feel too rigid or stiff like some other tires with protection strips.” I would agree with that assessment. While puncture protection belts can sometimes be annoying when setting tires up tubeless, this wasn’t an issue with the Power Gravel tires either, so that was a nice discovery. More on tubeless performance follows……

Tubeless Performance: First of all, we had a reader comment on our Facebook page that these tires were “impossible” to mount to whatever rims he was using. Without knowing which rims were trouble, we cannot say what the problem was exactly, but Michelin does state in the instructions that come with each tire that their product should only be mounted to “UST rims“. This is common for Michelin, Hutchinson, and Vittoria tires as they all licensed and/or use UST dimensions when manufacturing their tubeless ready tires. UST is a specific, tightly controlled dimension applicable to rims and tires. A variance from these dimensions, even only slightly, can greatly affect tire/rim interface. That means that Power Gravel tires may not mount correctly, or at all, to your rims. Which rims? Well, not all non-UST rims are affected. Some won’t work, some like Stan’s, probably will not work, or at least will be such that they are not a good, recommended fit. (NOTE- Folding bead, non-tubeless tire’s interface to rims is completely different. This only applies to tubeless ready tire designs.) I’ve run into this same situation for years using Michelin, Hutchinson, and GEAX/Vittoria mountain bike and gravel tires. With this in mind, read on…..

N.Y. Roll reports on his set up: “On to the tire set up. I am running these tires on my Salsa Warbird with HED Ardennes + wheel set. I have been running that wheel set tubeless for a few years now. I pulled my old tires off, wiped down the entire rim with a cleaner. I did my normal remove the core and set the tire up routine. I set the bead without sealant first. I did not use a tire lever to put the tire on. The side walls flexed enough that I was able to fold them over the rim. I used my hand pump to inflate the tires and heard two soft pings. I let the air out and then injected the sealant, and replaced the core. Repeating the airing up process and heard two soft pings. The second tire I did the same preparation, except this time I did not do a dry fit and left the core in. I went straight to putting sealant in. This time I used a tire lever to fold the tire over. I heard three very loud pings, and finished off airing them up at 65PSI.”

My set up was on WTB KOM i25 rims. I easily put on the tires by hand but I noted that they created a seal pretty easily. I also aired them up with a broken down old floor pump with zero problems and left them to sit with no sealant at 40psi overnight. More than 24 hours later they were still holding air, albeit at a lower pressure. Pretty impressive. Sealant was then added and after sitting overnight the measurements on the 40mm Power Gravel tires was 42.4mm for each tire. N.Y. Roll got a measurement of 35.9mm and 35.8mm for his tires. So, it would appear that the 35’s are a little closer to true 35’s while the 40’s run a tad wider. Note- the 40’s were set up on wider than typical rims, so a narrower rim might yield a narrower width.  Also- No excessive losses of pressure after tubeless set up were noted for either one of us.

Ride Impressions: The lower knobs promised a faster feeling ride, and that’s what I felt straight away with the rear tire at 40psi and the front at 38psi. However, the ride was jarring and rough. It was very noticeable. Later I tried lowering pressures by about 5psi front and rear which made a difference and the ride was smoother. The Protek bead-to-bead protection belt is most likely to blame here. Generally speaking those types of Aramid and Kevlar belts tend to make casings stiffer and less responsive. That didn’t seem to affect speed though, and in that respect these tires feel impressive. N.Y. Roll chimed in with his impressions thusly:

I went for a quick 14-mile paved road ride with a few back-alley transitions. These tires are stone flingers at first. After about a mile or two it seemed to stop tossing small stones, and rolling around town seemed to be fine. Some gravel tires I have seemed to roll like Velcro with the tread really adhering to the surface. These tires seemed to roll along just fine and had normal rolling resistance on pavement.  I normally run my tires at 35-40PSI range. I plan on starting these out at 40PSI and work my way down.

Next up we will report back with our impressions after riding these tires out on the gravel roads. Stay tuned for the “Checkpoint” post in a week or two.

NOTE- These tires were purchased by N.Y. Roll and Guitar Ted separately and neither of us were bribed nor paid for this review. We will strive to give our honest thoughts and opinions throughout.