Editor’s Note: Grannygear, our long time contributor here, is back again with a review of the new WTB Koda saddle. Enjoy!

Recently WTB released a new MTB saddle that caught my eye as a potential perch for gravel bike use.Although testing or recommending a saddle is a bit foolish, since no two butts are the same, I asked to see a sample and see how my wife liked it. Yes…this was intended for Mrs. Grannygear.

Pity the rider who, upon finding the perfect saddle for them, also finds that that same ‘perfect’ saddle will no longer be manufactured. Time marches on. So after we had scoured eBay for used versions of the fav saddle, we set about finding a newer model that would work. She uses the same saddle across road, MTB, and gravel, so if possible it would do triple duty.

This is what WTB has to say about the new Koda saddle. 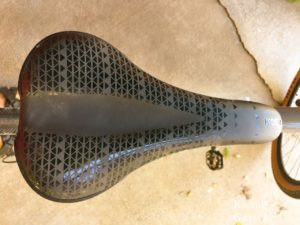 We were sent the Pro version with cro-mo rails and DNA padding, an upgrade from the standard padding quality. Note that WTB suggests a wide variety of uses ranging from road to enduro. In reality, what matters is what works for you. I tend to run a different saddle on road, MTB, and gravel so I am a mixed up mess in that way. But I find a medium padded saddle is good for gravel as it seems to offer the right amount of support yet gives some needed absorption of bumps and such.

I weighed the saddle at 234g in the 150mm wide version which is right in there according to WTB’s specs. It is a short saddle and the cut out zone is not that extreme as compared to other female specific saddles on the market. It also is not quite flat with small kick at the back and only a slightly dropped nose. I would call it a very generic shape and something that should be good all around unless you have some very specific preferences.

We have run it for many hours of riding now, and after the initial tweaking of placement, we have been pleasantly surprised. I say that, as my wife must have tried a good half dozen other options and typically rejected them after one ride. Sometimes less than one ride. The Koda is still in place and has been well received, being comfy for the most part and saving some weight off the old saddle. Bonus! 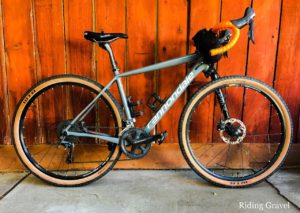 We also swapped it onto her Domane road bike and it has been OK there too.

If there was to be any improvement, Mrs. Grannygear would like more cutout. On longer rides, especially if she was climbing a lot as it would rotate her forward a bit and apply more pressure.

Of course, only you know your backside as well as is required to decide what saddle is for you, but WTB has been in the saddle game for a good long time and the Koda looks like a worthy addition.

Koda Overview with Rebecca Rusch from WTB on Vimeo.

NOTE: RidingGravel.com was not paid nor bribed for this review. Grannygear strives to give his honest thoughts and opinions throughout.