***IMPORTANT COVID INFORMATION*** DUE TO THE VERY HIGH NUMBER OF EVENT CHANGES, ALTERATIONS, AND CANCELLATIONS, WE ARE CONTINUING THIS EVENT CALENDAR AS AN ARCHIVE ONLY. YOU SHOULD USE THE INFORMATION ONLY AS A HISTORICAL REFERENCE. YOU NEED TO GO TO THE SPECIFIC EVENT WEBSITE TO GET THE MOST UP TO DATE INFORMATION. PLEASE ALSO NOTE – WE ARE NOT THE ONES TO CONTACT WITH QUESTIONS. IF YOU HAVE A QUESTIONS ABOUT AN EVENT, PLEASE CONTACT THE EVENT CONTACTS DIRECTLY.

The DAMn – Day Across Minnesota 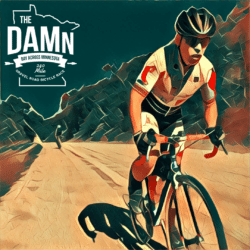 The DAMn  –  The Day Across Minnesota, also known as The DAMn gravel road bicycle race. Racers will traverse 240 miles of Minnesota gravel roads by bicycle in a single day. That’s right, they will have 24 hours from start to finish. They will start in South Dakota and finish in Wisconsin.

Racers who attempt the 240 mile Day Across Minnesota gravel road bicycle race will start in Gary, South Dakota on Saturday August 5th 2017 as the clock strikes midnight. If they finish, they will finish no more than 24 hours later in Hager City, Wisconsin. This epic point-to-point adventure will require each racer to get themselves to the pre-race check-in on time, get themselves across the state of Minnesota by bicycle, and to get themselves home afterwards. *There are no shuttles and will be no on course support being provided by The DAMn.

There will be a pre-race program from 11:00pm until 11:30pm. Afterwards, racers will gear up and head directly to the starting line. Checking in before 11:00pm and attending the pre-race program are both mandatory, so be there. The neutral roll-out happens promptly at midnight.

We understand and hope that the point-to-point logistics combined with the optional neutral support opportunity may increase the desire to car-pool and share support crews. Have a DAMn car? Need a DAMn crew? Head over to the Riding Gravel Forum DAMn Thread.