The Breezer RADAR Expert has been ridden in several different sorts of situations ranging from pavement all the way to single track and everything in between. This steel adventure bike was recently introduced to you in our “Getting Rolling” post. Click that link to get all caught up. Now for a dive into what the RADAR Expert is all about. 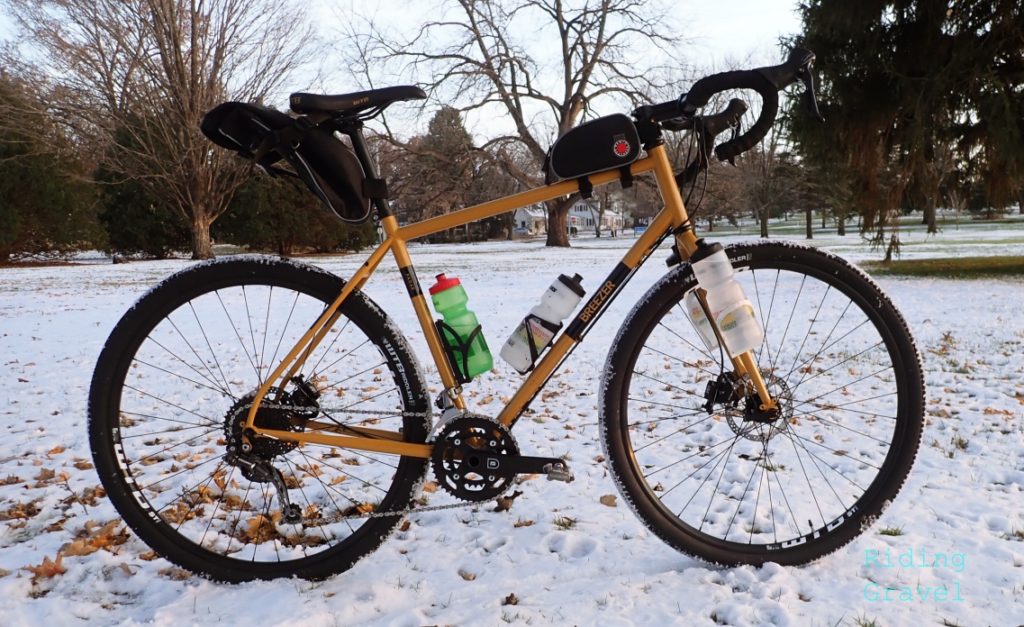 The Breezer RADAR Expert set up for some exploration and fun using some Banjo Brothers bags.

First Impressions: Remember how I said that the Breezer RADAR Expert strikes a “skinny” pose in comparison to many bikes out which feature bigger carbon or aluminum tubing? Well, that sort of bit me when mounting a top tube bag. The top tube is so skinny my Banjo Brothers Top Tube bag straps overlapped too far! I got it figured out though and I was able to use the bag after all.   Interestingly, concerning those skinny tubes, I had a conversation with Joe Breeze years ago at Interbike where he mentioned that a frame will ride better if the tubing has longer, uninterrupted sections. It is a philosophy of frame detail which shows to this day in Breezer’s RADAR Expert. Note that there is no long, forged drop out coming back several inches toward the bottom bracket here. Nor is there a big, odd looking disc brake brace on the left chain stay bridging up to the left seat stay. This Breezer looks cleaner because of these details, and, according to Joe, this should lend the RADAR Expert a better ride quality. 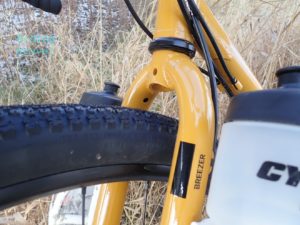 See that hole under the uni-crown fork’s bend on the left in this image? It’s a internal dynamo wiring port. There is a matching hole near the drop out.

I had to make a few minor adjustments in my first few rides to accommodate my position on the bike. The reach on the size Large seems a tad bit long, as mentioned in the “Getting Rolling” post, so I slid the seat forward on its rails to help that out, and it worked very well. The usual tweaks to the cables and whatnot were also done during the first few rides. I also had to re-learn how to adjust a tire with a tube in it. How long has it been since I ran a bike with a tube in it? Anyway…..

With that all adjusted I found that the RADAR Expert was a nice riding bike. On the first ride after the adjustment phase, I had a pretty stiff headwind. I kept hearing a musical whistling noise. This is common at times when the wind is strong and it hits spokes or whatnot just right, but this was different. It sounded almost like one of the recorders they give kids in elementary music classes here. Anyway, it would go away if I turned out of the wind. With some investigation, I discovered the musical note was due to the open holes in the drive side of the fork blade for what I presume is a dynamo wire. There is no mention of this feature on the RADAR Expert page that I could find. These ports could be covered with a bit of tape, if the music isn’t your thing, but I left them open. I found the note to be whimsical.

Onward to the gravel, the RADAR expert was ridden on a day which followed a light snow fall. There was ice, snow, and mud involved and the RADAR Expert showed me that the geometry is very stable. I had a few sections of straight up snow and ice where the RADAR Expert’s wheels and tires were a little over matched. The bike slid out slightly a couple of times, but I was able to gather it back up easily regardless. 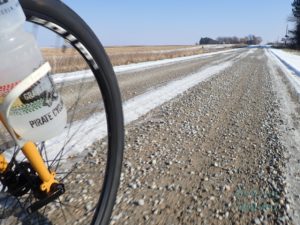 The RADAR Expert was stable and smooth regardless of the surface.

The frame is smooth, certainly, and it is even more impressive when you consider that the seat post, handle bars, and wheels are not high-end, not noted for being compliant, so the frame has to be where the majority of this compliance is coming from. The frame has a nice “give” which you really notice when you run into a slight dip which “G’s” out your weight. But otherwise the frame does not give me the sensation that it is “whippy” or flexy at all. The fork has very stable steering precision, and does not give you an overly harsh ride.

The components are serviceable here, but there were a couple of hiccups. The 9 speed drive train had a propensity to get fouled at times which caused “skipping” in the higher end of the cassette’s range.  The chain rings sometimes don’t release the chain properly which resulted in a bit of chain suck at one point when the wet, gritty gravel was coated over the drive train. It’s pretty much par for the course here. The parts spec on the RADAR Expert is not the sort of spec which lends itself to more trouble free riding in severe conditions. That said, with a bit of knowledge and skill on the rider’s part, one can effectively overcome many of the characteristics that the spec has on this bike. Of course, upgrading the bike is always an option down the road. The big question there would be, “Is this frame and fork worth it?”

While the wheel standards and steer tube dimension here could almost said to be “old school”, I feel that the frame and fork are worth it to consider upgrades from the standpoint of the ride alone. Added into this would be the versatility of this bike, so in my mind, if a long term goal would be to eventually make some upgrades to the RADAR Expert’s parts, I think that is a very reasonable goal. I don’t mean to make it sound as if the component spec is not up to par here. That isn’t the case at all. In fact, there are some pretty outstanding parts on the RADAR Expert. 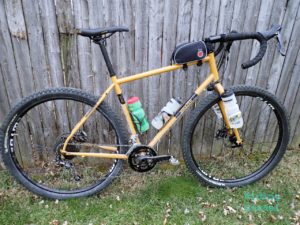 Look for a report on what can be done with a simple tire swap to the RADAR Expert in our “At The Finish” post next time.

One of the stand out parts for me was the TRP HyRd brakes. After they got bedded in, they worked with more power and ease of use than any mechanical brake that might normally be spec’ed at this price range. While not in the same league as a fully hydraulic brake, they are close. Also, the Oval branded handle bar was nice. It has a flattened top section, good for when you want a more comfortable hand grip while cruising upright. The flare and sweep weren’t obnoxious, but it was there. The only thing I wished for was a bit more length in the extensions. The WTB bits were spot on also. The saddle happens to agree with me, and the Riddler tires, while not tubeless ready versions, are really good at gravel. pavement, and drier single track. Just what the RADAR is all about. Finally, while the Sora level shift/brake levers are not as precise as their upper end siblings, the hood shape and lever shape is now on the same page as those nicer groups. That was nice to see at a 9 speed group level.

So Far…. The Breezer RADAR Expert is a bike built for adventure and exploration. The steel frame is up for the task and the spec, while not spectacular, is decent and should provide good service and a low cost of maintenance. The TRP HyRd brakes, 9 speed mtb drive train matched with Shimano Sora shifters, and tubeless ready rims are highlights in the value department. The RADAR Expert smooths gravel well, and it rides lighter than it feels when you heft it. Single track is on the menu here as well, as long as it isn’t too radical. It is a rigid bike, after all. The versatility of this bike is a highlight as is the ride quality. Look for our “At The Finish” post coming in a few weeks.

Note: Breezer Bikes sent the RADAR Expert over at no charge for test/review. We are not being bribed, nor paid for this review and we will strive to give our honest thoughts and opinions throughout.