The Waheela S presents a conundrum for the average cyclist. Is it a mountain bike with drop bars, a gravel bike with a suspension fork and dropper post, or just a confusing amalgam of styles? How does it feel to have a 40mm travel Fox fork and a dropper post on gravel? Where do you even need that? These are the questions I sought to have answered since the last post on this bike, which you can access here. In that post you will find all the tech data and features that this bike has on offer.

The Changes: There were a few changes made to the Waheela S after I received it to make it fit me better and to accommodate the century on gravel ride I had in mind to use it on. So, I will briefly cover this first.

The stem on the Waheela S is shorter than typically spec’ed on a gravel bike due to geometry Otso borrowed from cross country mtb’s. They explain by saying it is a”….a page from the cross-country playbook with increased top tube lengths and shorter stems“. Interestingly I found the Size Large, (akin to a 58cm for reference) to be no longer than many road bike’s top tubes in the 58cm range. The stem was low and positively too short, cramping me up on the bike and forcing a lot of my weight forward over the bars. I swapped out to a 90mm stem with some rise to a much better effect.

With the fit dialed I wanted to swap in some beefier rubber, since much of the course is dirt road and primitive. I found that a 29″ X 2.0 WTB Nineline tire swapped into the rear of the Waheela S with room to spare. However; the Fox AX suspension fork, with its drastically reduced travel, will not clear a 29” tire. Bummer! After contacting my Otso rep, I was also told that the Lauf Grit is not recommended for that large a tire either. Our tester MG confirmed as much to me, as he has a Lauf True Grit on test for this site here.

Had I specified that the Waheela S come with the carbon Lithic fork, I could have run 29″ers on both ends, but alas, I ended up with 650B wheels and tires instead. The tires I used were the WTB Byways in a 47mm width, tubeless, on the Irwin Aon GX 35 carbon wheels tested here.

Ride Performance: I completed the 102 mile course on the Waheela S and here I will break down the opinions I formed for the specific parts of the bike, then an overall opinion will be rendered. 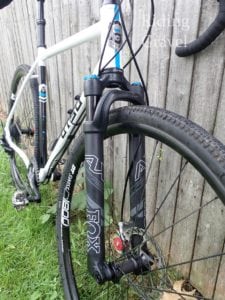 Summing Up: Okay, so what do I think of this bike? Well, it is a unique rig, unlike anything I’ve tried on gravel. The Fox AX works great on regular gravel and dirt, but after hitting a few things at speed and having the fork bottom out so hard, I have to wonder if it is an application which has good intentions but is not the best answer for the problem, as it were. Getting the fork not to bottom out so severely shouldn’t be hard to do, but it would come at the expense of the smaller chatter, and then what would be the point? Added to this would be the required maintenance schedule, and then it gets harder to make sense of this fork. Still, some may see the value in it, so I cannot totally pan it. That said, it seems like a 1990’s sort of set up. One fellow rider quipped that it would make more sense to develop a bike for 100mm of travel and then have a fork that would actually be a capable device on all sorts of terrain. You know, sort of like a Fargo……

The clearance the Waheela S has in the back is amazing, but with a Lauf or Fox AX suspension fork you can’t use a 29″er tire up front. This seems like a misstep as well. (See Fargo comment above.) So, the fork is interesting, works a trick much of the time, but leaves me wanting.

I’m also not buying into the modern short stem/long top tube story on this bike. For one thing, generally speaking this school of thought employs wider bars with that shorter stem, but this test bike came with a narrower set of bars than I would typically use on a gravel bike.  In my opinion, the Waheela S has traditional geometry in that you need a longer stem than Otso specs. Otherwise it was fine, and I think that with the Lithic fork, 29″ wheels, and a wider set of handle bars, this bike would really come into its own.

The dropper is not something you really need, but it makes riding more fun. I like fun. So, this new idea for riding gravel makes sense to me. I mean, who doesn’t like going faster down hill?

So Far……The Waheela S is packed with features that may make sense for some of you. The Fox AX fork is impressive, but at 40mm of travel, its useful range is somewhat limited. The dropper post is revelatory. It won’t be everyone’s cup of tea, but it adds a dose of fun that is undeniable. The limitation to 700 X 45 or skinnier tires, or 650B, up front is disappointing if you get a suspension fork because the back end of the Waheela easily handles 29″ X 2.1″ rubber. Overall the bike handles well and it can be quite a versatile bike depending upon which spec level you choose.

Note: Otso Cycles sent over the Waheela S for test and review to RidingGravel.com at no charge. We were not paid nor bribed for this review and we will strive to give our honest thoughts and opinions throughout.