The RidingGravel.com calendar is chock full of great gravel events from which to chose from. The choices have grown to include several varieties of events and number over 400 as of this writing. That’s a far cry from the small handful of events I first listed in 2008! With so many events listed we wanted to help put the spotlight on a few upcoming events we think are unique and interesting. This time we are featuring a series of gravel events in Kansas.

The effort to organize and execute a single event can be enormous, but co-founders of the Rage Against The Chainring, Josh Sears and Mark Moerner, have an entire series of events which are held around the Wichita, Kansas area. The series consists of four distinct events running in March and April. To get a feelfor the inspiration behind the series and what the goals of the founders are, let’s go to Josh Sears here. The following is excerpted from a piece written for a local Wichita newsletter and was shared with us by Josh Sears. 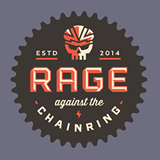 Rage Against the Chainring; by Josh Sears

“David Ham introduced me to gravel.  My first bike was “Bullwinkle”, a Raleigh 26er that he let me borrow.  It worked and I was hooked. Dave also introduced me to my co-promoter, Mark Moerner, in March of 2013. I love Dave. You will not find a kinder spirit in the world. He epitomizes the gravel community and without his influence Rage Against the Chainring would not exist.

By 2014 I’d replaced Bullwinkle with a Giant Anyroad and I was ready to attempt my first Dirty Kanza 200. I had done several of Bobby Smith’s Boneshaker rides in Southeast and Southwest of Kansas and felt like I was ready. I wasn’t 12 miles in when someone accidentally ran into me and snapped my rear derailleur. I was done and it was upsetting. Back in town after a few beers the lingering thought of what could have been was slowly being replaced by thoughts of what could be and that’s when I got the inkling for RATC.

200 miles is a tough ask, even for elite athletes. Some of the most talented people I ride with have fallen short while others have struggled with even getting through the Half Pint 100 (Editor’s Note: The Half Pint is a 100 mile option at the Dirty Kanza 200). This got me to thinking and asking questions. Are there people who struggle with the intimidation of riding 100 or 200 miles? How many other people have kids and struggle to commit an entire weekend to racing? What is a distance that would feel like an accomplishment for someone who was a beginner, but would still push elite riders? Will the riders who live for events like the Land Run 100 and the Dirty Kanza 200 even show up to a shorter race?

I was at the shop one night and I asked Mark those same questions and the response I got was, “My fat ass would do something like that. Between the shop and the kids I don’t have the time to train for anything longer.”

That is when we decided to start the RATC series. For some it would be their end goal. For others a series of steps to evaluate their fitness along the way to greater aspirations. We decided we wanted this series to showcase Wichita. We went after local sponsorships, focused on partnering with local organizations, and sought to showcase different parts of Sedgwick County. That first year we said we would continue on if we had 20 people show up at each race.

On day one we officially had 104 riders show up. Minds blown! The rest of the series was the same way. People showed up, raced their bikes, had some good conversation, drank some beers, ate some good food, and we all had a great time. Year two was just as successful. We continued to grow and had more riders and brought in people from 5 states. I believe for the first time in gravel racing history we started and finished a race on the tarmac of an airfield. This was at the finale which is held each year at Stearman Field in coordination with their bar and grill. It is a must for anyone looking to experience the community and camaraderie that you find at any big gravel race.

We don’t plan on making many changes this year, but there will be a few. As we continue to expand our horizons we have added RFID timing this year. We feel this is a must as the series continues to grow. We will also be giving away a lot more swag to the field this season. The fast guys deserve the podium spot and the award that they earn, but we want everyone who shows up to know that they are just as important to the identity of this series.”

Rage Against The Chainring site

If you would like to see your upcoming event featured here, give us a shout at guitarted@ridinggravel.com or ben@ridinggravel.com We’d be happy to work with you to get a story up about your event.

5 thoughts on “Featured Event: Rage Against The Chainring Series”