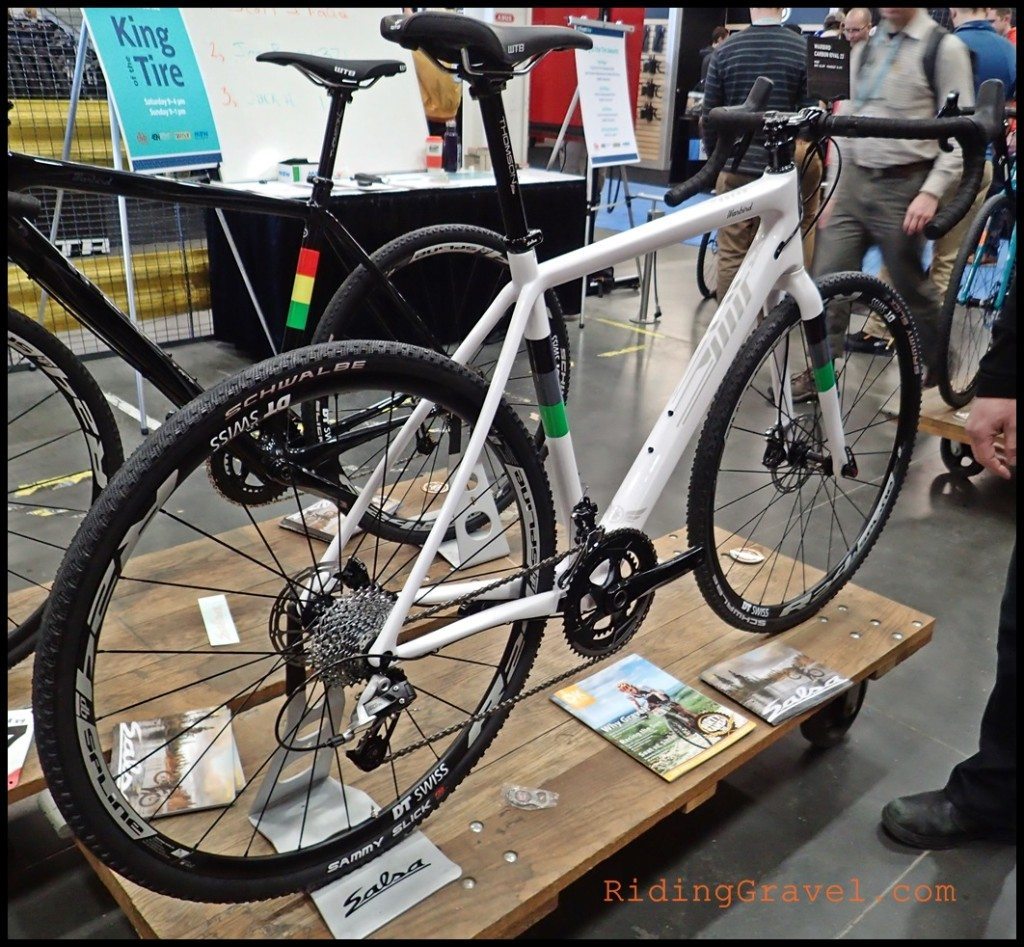 The Warbird has been redesigned from the ground up. Here shown in carbon.

Bloomington, Minnesota: It wasn’t long ago that there weren’t any bicycles aimed at riding gravel roads or for racing on gravel roads, for that matter, but Salsa Cycles changed all that several years ago now with the Warbird. It was offered first in aluminum and a top of the range titanium model. Salsa Cycles saw some success with that model, but it was criticized for having limited tire clearances, and the aluminum model was maybe not the most compliant bicycle you may have ridden. Salsa went back to the drawing boards, did a lot of R&D work, and this past weekend unveiled a new Warbird to the public at Frostbike. 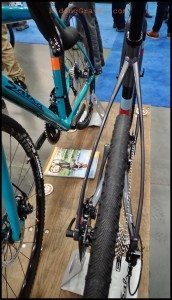 The Warbird features these stunning, flared seat stays. They aren’t just for looks. Here seen on the aluminum Warbird.

Say Goodbye to Titanium, and Hello To Carbon: In the search for a better Warbird, Salsa Cycles went to a clean slate for the design, preferring to improve upon all the complaints and shortcomings they perceived to be in the old bike. Many of these things are manifested in minute details, but probably the two most obvious things the beholder of the new Warbird might notice are the carbon fiber frames and the amazingly bowed out seat stays. Make no mistake, both things were well considered design choices.

Salsa Cycles is calling the design overall, “Class 5 VRS“. (Class 5 refers to the gauge of gravel used on roads in most of the Midwest, by the way.) It is a “vibration reduction system” that entails the reason for the flared seat stays and the newly designed Salsa Carbon fork. Sean Mailen, one of the lead engineers at Salsa Cycles, spoke to me at length about the design for the new Warbird. Starting with the idea that he needed a baseline to design from, he employed accelerometers to measure the old Warbird models, competitors forks, and get numbers that he could build from.

Mailen said that he envisioned a way to utilize an effect he was aware of when examining a design without a “seat stay brace”. (That’s the short tube bridging the seat stays just above the rear tire on most bicycles.) He noted that the seat stays had a tendency to bow outwards if this brace was absent. That led to a design which uses seat stays which are flattened and are reminiscent of a wishbone shape when viewed from the back. Now, to tie it all together, Mailen needed to focus on lateral stability. Something a seat stay-less bike would be in great need of. Mailen landed on a solution which employs beefy chain stays tied together by a 12 X 142mm through axle mated to a massive PF BB86 bottom bracket shell which allowed for a wider set to the chain stay connection. Furthermore; the chain stays are flattened in the horizontal plane to further enhance stiffness and allow for a bit of vertical compliance. 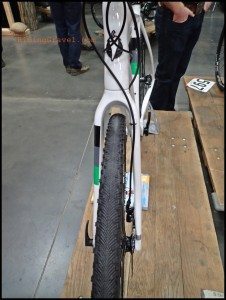 Both aluminum Warbirds and Carbon Warbirds get the same, new Salsa Carbon fork.

Completely New Fork Design: All that work on giving rider comfort on the back end doesn’t pay off unless you have something going on in terms of comfort with the front end of the bike. Mailen was concerned that “off the shelf forks” were too stiff, and his baseline accelerometer testing of some current offerings gave him actual numbers to base a new design off of. With this data in hand, he was able to design a fork that would track well in corners, due to the use of a through axle and specific carbon lay-up, but also be somewhat more forgiving in the chatter usually found on many gravel road events. With this new fork, rear stay design, and increased tire clearances for the new bike, (44mm on the carbon model, 42mm on the aluminum ones), Mailen has achieved what he set out to accomplish. And, he has numbers to prove this.

Essentially, the only thing carried over from the old Warbirds to the new ones is the geometry, which Mailen said was not a problem for any riders he was aware of. 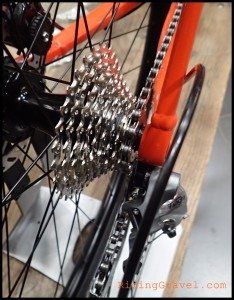 The use of a rear through axle was critical to the success of the Class 5 VRS idea, according to Sean Mailen, Salsa Cycles engineer.

B-Road Mud Clearance: The new design for the Class 5 VRS also allows for greater mud clearing capabilities on the new Warbird models. Part of this is also attributable to the lack of the seat stay brace and there is also no chain stay bridge on either carbon or aluminum models. Mailen said that in prototype testing, in an event he was riding the new Warbird design in, he encountered a clay-ish, wet, mucky B Road, (minimum maintenance roads that typically are all dirt with little to no grade work by the road maintainers), and he was able to ride the bike through due to the mud clearances. He claimed he passed three or four other riders on foot and was able to place ahead of them, all because he could ride when they could not. Searching for sticks to clear out mud, claims Mailen, is a thing of the past with the new Warbird.

Other Technical Details: The new Warbird utilizes the PF-BB86 bottom bracket, which Mailen credits as a better way to do things than PF-30. The bearings sit further outboard, and Mailen states that in their field testing, the smaller spindle size used in BB86 seems to increase bearing life and reduced creaking complaints to zero over PF-30 type bottom brackets. Brake and cable routing are now internal for the drive train, and external for the rear brake, for ease of maintenance. Mailen pointed out that if a rider chooses to run a single front chain ring, the rear brake cable could then also be internally routed. Carbon frames are built with a removable front derailleur mount and a separate cover can then be placed over the remaining cavity for a smoother look.

The internal routing is handled differently on the carbon frames. The ports allow the full cable housing runs to exit at the bottom of the down tube and then each cable runs in housing with the rear derailleur cable returning to the frame at the chain stay and the front cable exiting through a grommet and through the frame behind the seat tube to the front derailluer. 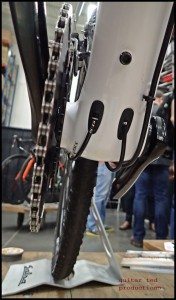 The aluminum frames are done differently with a big window formed by the bottom curve of the down tube which allows the housing for the front derailleur to hit a cable stop before the cable exits and runs on a guide, much like a traditional front derailleur cable does, and then up to the derailleur. Since the cable stop faces downward, it virtually eliminates the possibility of cable housing contamination. The rear housing simply exits here and then runs externally to the rear derailleur underneath the drive side chain stay. Kits are available to convert carbon frames to Di2 routing as well.

Other Tidbits: Mailen explained that stack heights were lowered slightly to give some riders the opportunity to run lowered handle bar positions and aero bar clip ons without being too upright, which was a complaint with the older Warbird. Chain ring sizes can be as large as 39T/53T. All versions of the Warbird use a 27.2mm seat post size. All versions of the Warbird are available in six sizes: 51cm, 53cm, 55cm, 56cm, 58cm, and 60cm. Each Warbird version is available in two colors for six choices total. No frame only offerings were being made available at the time of posting. Update: We have learned that there will indeed be one carbon and one aluminum frame/fork offered. The carbon in Black and the aluminum in Teal.

Pricing, Weights, & Spec Level: Warbird Carbon Rival 22 models, (Salsa seems to be moving away from the numerical hierarchy used previously), is spec’ed with SRAM hydraulic Rival levers and a smattering of Thomson and Salsa bits with DT Swiss wheels shod with Schwalbe Sammy Slick tires. Claimed weight for a 56cm bike is 19lbs, 7oz. MSRP is set at $3499.00USD. This spec level is available in Black or White. 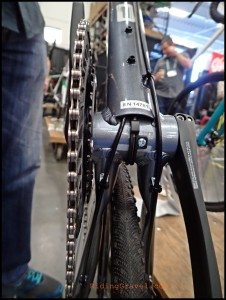 Warbird 105 11 models are spec’ed with Shimano 105 11 speed and a SRAM BB-7R mechanical disc brake set. Wheels have Salsa by Formula hubs and WTB rims shod with the same Sammy Slick tires as the carbon bikes. This aluminum framed Warbird comes in at a claimed 21lbs, 3oz for a size 56cm, lists at $2499.00USD, and is available in Teal or Gray.

Warbird Tiagra is….you guessed it- spec’ed with Shimano’s 10 speed Tiagra group with slight down specs at the rims, tires, (wire bead Sammy Slicks), and in the cock pit area. A 56cm version is claimed to weigh in at 22lbs 6oz, comes in Army Green or Orange, and goes for $1999.00USD.

Impressions: The new Warbird line up is stunningly beautiful, with tastefully subdued graphics, (no down tube Salsa decal at all on the carbon model!), a nice “wheat” graphic motif, and nice colors with “warbird” type plane stripes in contrasting colors on all offerings. The wishbone shaped seat stays are wild looking and I have to say that you can flex them by squeezing them with your hand, so there is something to the claims here. Wider tire clearances are definitely a highlight, even if you’ll never use that room for bigger tires. Those who do will have plenty of tire choice options to tailor their Warbird to any course conditions, and those who don’t will enjoy the massive mud clearances.

In the end, it would seem that Salsa has addressed all concerns here, but we miss frame only options, (Again- we have heard there will be frame only options), and were hoping that Salsa might at least tweak the 70mm bottom bracket drop downward a bit. This is not a cyclo cross bike, but a “road bike”, after all, and it is this writer’s opinion that most so-called “gravel bikes” could stand a lower bottom bracket for stability. Three sets of water bottle bosses are a good thing, but don’t look for fender mounts or rack mounts on the Warbird. This may limit its appeal to some.

Those small concerns aside, the new Warbirds are a big change in the right direction for gravel road bikes. Hopefully the designs live up to their billings, and the only way we’ll know that is with the passage of time.

Riding Gravel.com would like to thank Salsa Cycles’ Sean Mailen for spending time with us talking about the new Warbird models.For more on the Warbird models, see Salsa’s site HERE.

You are welcome to discuss and share your questions or thoughts about gravel bikes, gear, events and anything else on the Riding Gravel Forum.