We at Riding Gravel HQ have been busy behind the scenes on Mountain Bike Radio. It’s been growing so much, so quickly that we’ve spent time focused on that. Meanwhile, we’ve kept our ear to the ground about all the exciting gravel goods coming out. It’s been a busy spring and summer and it seems that there is a lot going on behind the scenes.

It seems that we’re about to see a full-on push of new bikes set up specifically for gravel style events. When will we see them? Perhaps the new updates start with QBP’s Saddle Drive coming up July 20-22. As QBP’s Salsa Cycles was the first large company to make a specific gravel race bike in the Warbird, we would guess that there will be some updates and changes coming to keep them ahead of the game.

The following are some of those new bikes:

GT Bicycles comes with a bit of surprise with their new all road bike called the Grade.

“But, there’s no denying the growth in adventure riding, and that growth is worldwide. GT says they’re seeing growth in sportives, fondos and non-sanctioned ride/races in Australia, throughout Europe and elsewhere. And of course we’re seeing a lot more of it in the U.S., too. Since big fat knobbies aren’t always the best way to get there, something new was in order. The people riding these (um, like us) want something that’s a bit more comfortable than a pure ‘cross bike but can handle wider rims and tires than a road bike. And disc brakes, of course. So, yeah, the explosion in gravel riding and racing seems very recent, but thankfully GT saw it coming – their new Grade looks amazing…” 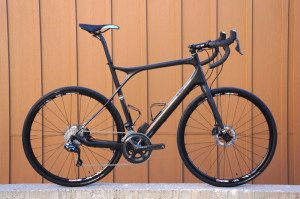 There is no doubt that Specialized has a ton of resources to pour into whatever popular segment is emerging. Many pictures have been shared around and debated. Some commenting bike fans seem to think that it may be a disc brake Tarmac, while it is clear from many closer to Specialized that something is up.

“Since the Roubaix received a complete redo in 2012 (as a 2013 model), we’re inclined to believe this is a dedicated gravel road bike. That’s not to say it couldn’t be a new Roubaix, but one particular frame detail suggests this is a more race-oriented design: The seat tube gets cut out to allow the rear wheel to tuck in tighter. That’s contrary to most gravel bike’s (and the Roubaix’s) slightly longer stays to improve stability.”

“The Diverge will have massive tire clearance, possibly over 40mm, and the geometry will be more similar to the Roubaix and Secteur, according to a source close to Specialized. Racers will familiar with the Roubaix, the bike Nikki Terpstra rode to win Paris Roubaix, but the Sectuer is more of a commuter bike with flat bars and loads of rack mounts, which the Diverge is expected to use as well.”

Niner’s RLT has been around for awhile already and almost what seems to be ages in the “new” gravel category, but they’ve updated the lineup with a top of line version of the RLT. The RLT9 5-Star Ultegra Di2 model brings a much larger price tag than the 4-star model, but also spares no details to give riders a quality high-end option.

Get the rundown of specs here

CXMagazine.com has a great article with a lot of info about the Rove ti if you’re looking in that direction.

Have a read about it over at CXMagazine.com

This is another bike, like the Rove, that has been out there awhile. For those readers who are new to the gravel scene may be searching around to see what is available and the Tamland definitely deserves to be in the conversation. Reports would indicate that they did their homework.

“The bottom line though is this- The Tamland is the standard by which gravel bike specific design will be judged going forward. It is hands down the best handling bike on gravel I’ve ridden to date.”

Is there something that you’ve found that you think should be shared? Just let us know by contacting us

Be sure to become part of the gravel scene conversation by reading or contributing to the Riding Gravel Forum.