Editor’s Note: This Quick Review came about as our contributor, Grannygear, happens to know the owner of this model and got him to write up his impressions of the bike. Thanks Ed and Grannygear for this quick look at Raleigh’s Willard Two.
Raleigh Willard Two: Quick Review- by Ed the Tall
My 2014 Crusher in the Tushar ride/race was a real highlight in my rather limited collection of races. The mixed terrain, steep climbs, scenery and great mix of like-minded people from all over the country confirmed right away that I needed to get back in 2015. Question #1: what bike would I ride? Question #2: could I afford said bike? Question #3: would I be buying a bike that I would ride a few times a year, at most?
The third question was actually the most important consideration, so let’s call it Question #1. I ride mostly in the mountains of So Cal, not exactly the hub of the gravel-grinding world. I figured I could grind up most of the off-road climbs, but what about the downhills? I imagined taking a “road” bike down through ruts, rocks and sand; and the idea began to fade. Also, I like to consider myself a bit of a minimalist, and purchasing a novelty bike to be ridden a few times a year doesn’t fit my ethos. Consequently I procrastinated, even well after I had committed to doing the 2015 Crusher.
The Willard wasn’t on my radar when the idea I could own one surfaced back in early June. On paper, this bike seemed to fit what I was looking for, and importantly the price point was within my reach. Well within my reach, which is an important consideration for pretty much all of us. For me, it allowed me to envision using this bike in another role, that of my around town bike that I could lock up and not think too much about while getting an errand done. Since crashing my town bike into a parked car at 15mph last year, and shortening the bike’s wheel base by about an inch, I’ve been without that bike. The Willard could be that bike, so I jumped on the opportunity when a good deal surfaced.
Okay, time for that first ride! Excited by the possibilities, I pumped the tires up to 70psi and rode over to one of the steeper fire roads around. Crawling up the climb, gasping for breath, it seemed this was harder than it should be, harder than it needed to be. I made the top, only to “white knuckle” the 3 miles of downhill. Might have been that 70 psi…On top of it all I flatted somewhere near the bottom. I was a bit dejected upon arriving home. That ride humbled me. Thankfully, I don’t mind being humbled and with a few tweaks to the set-up I was ready to try again.
After letting a bit of air out of the tires, the next most sensible thing was to get some more gearing in the back end. I bought the Willard 2 specifically because I felt like I wouldn’t have to make any changes to the drive train. Wrong… For my area, I need something lower than a 34-28 combo. Enter the Ultegra mid-cage derailleur and 32-tooth cassette. With these installed, I was ready to flog a bit more while getting ready for the Crusher ride. Note: I see that the 2016 Willard’s will come with the 32-tooth low gear on the cassette standard. Maybe I’m not the only person west of the Rockies riding this bike regularly?
After fussing a bit with sizing I decided on getting the 60cm frame (I’m in the 6’-2” range, with a long inseam) and I’m really glad I did. Here are some real highlights in the bike and bike components:

My first time out on the Willard was an aberration. I’ve ridden the bike plenty now, and it has quickly become my “go to” bike whenever I want to get in the dirt. I wouldn’t say the bike floats up climbs (it doesn’t, probably due to the somewhat portly wheel set), but I’m continually amazed at the terrain I’m able to ride it on. Sigh…my descending skills on the bike have and continue to improve, but I’ve never been a great descender. I feel I’m not helped by knowing, by virtue of the mountain bike, how fast I could be going down these roads and trails. However, slowing down and even stopping (hands cramping from rough descents) ain’t so bad from time to time. I’m also happy to say that the bike is regularly seen cruising the local bike paths on the way to the market, the post office, etc.

Recently it began to rain when a monsoon system rolled though our area. With the exceptions being the surrounding mountains and deserts, summer rains that do much more then tease for 5 minutes are rare in our foothill area of So Cal. Seizing the chance at hand, I quickly got dressed and rolled out. The clouds hadn’t opened up just yet, and I made my way over to a nearby park where a narrow ribbon of asphalt heads uphill though a tight canyon for a couple miles, with a couple little ramps thrown in for fun. The rain started light and was progressively getting more intense with a cloud burst near the top!  I couldn’t have timed my turn around any better. Squishy chamois, soggy shoes, the 20 minute, mostly downhill ride home had me grinning from ear to ear. Here’s to playing in the rain!
Much like the first time I jumped aboard an MTB single speed, the bike has transformed my usual spins into something unique and has me pouring over maps trying to figure out how to link together rides I didn’t think possible in the local National Forest. Heck, I might even find myself using the rack mounts at some point when the weather turns cooler. The possibilities seem endless!
– Ed the Tall 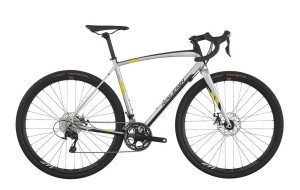 [Thanks to Raleigh Bikes for the chance to own this well done example of an all surfaces bike.  The 2014 Willard 2 model discussed here has been upgraded somewhat for 2015 with gearing changes, now sporting a 46/36 crank and an 11-32 rear cassette in the 11spd 105 group, and a thru axle fork, among other things.  It still sports the fine TRP Spyre Mechanical dual actuated discs with 160mm Rotors and the Clement X’PLOR MSO, 700x40c, 60TPI tires that work so well here in SO Cal.  MSRP on the 2015 Raleigh WIllard 2 is $1,749.99. ]