According to the very official news source, Facebook, it looks as if the very popular Land Run 100 will be switching to a free event for the 2015 version. I’m sure that we’ll hear more about that after the 2nd annual version this Saturday. Stay tuned to here for results and updates about next year.

“The Land Run 100 is a solo, self supported, non-stop, 100-mile-long bicycling endurance challenge on the gravel and dirt roads surrounding the site of the Oklahoma Land Run of 1889.” 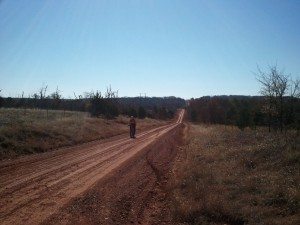 View of the Land Run 100 course – courtesy of Landrun100.com

I created Ridinggravel.com in the fall of 2013 and happily joined with Guitar Ted in late 2014 to form the current day Riding Gravel. Originally from Wisconsin, my wife, 2 kids, spent several years in Colorado, before spending a couple years in North Dakota. Now we're back in Northern Wisconsin in the middle of an Outdoor Mecca.
View all posts by RGBen →