We recently received a note from the Colorado Springs Cycling Team about the first ever Frost Bite Gravel Grinder. 80 riders departed Pikes Peak Brewing in Monument, Colorado at 12pm on Saturday, December 20 under fair skies and relatively good temperatures and conditions for late December for 40 miles of gravel fun. The ride was a combined effort of COS Racing Organization, Criterium Bicycles, Nord Custom Bikes and Kids On Bikes. The post-ride gathering was held at Pikes Peak Brewing and included a raffle for great cycling goods with all the proceeds going to Kids on Bikes.

They also sent over some pictures from the event. Have a look and enjoy the Colorado views!

The Unique Area and Terrain

You may be thinking, “Where do you do this sort of riding in Colorado? It’s supposed to be mountains!” While the state is filled with mountains, many cyclists don’t realize that the open plains extend from the Eastern border all the way to the Fort Collins – Denver – Colorado Springs corridor. The corridor marks the “Front Range of Colorado.” Generally speaking, I-25 can be considered the break between the plains and the mountains. To the west of I-25, you’re quickly in the mountains and to the east, it’s expansive views of wide open, rolling hills. The particular area that this ride takes place in is quite unique.

Sitting between roughly 6,000-7,500 feet above sea level, the area of the course is across an area known as the Palmer Divide. The Palmer Divide, named after William Jackson Palmer who founded Colorado Springs in 1871, is a ridge of higher terrain in the area that sits in the area between Denver and Colorado Springs and extends from the eastern edge of the mountains out to the city of Limon on I-70, southeast of Denver. It’s an interesting formation because it separates the Arkansas and Missouri River basins and, because of the slight increase in elevation over the surrounding terrain, often causes it’s own micro-climate, resulting in more rain and snowfalls that sometimes reach 2-3 feet.

So, why is all of this important for the ride? There are several reasons, including the following:

1. Terrain: The terrain provides challenging rolling hills that trick many Colorado riders into thinking the rides are no big deal. Used to rides of 5,000 + feet of climbing on the Front Range are a dime a dozen, so when riders see 3,000-4,000 feet of climbing over 40 miles, they don’t take a second thought. They don’t take into account the constant pedaling and short, constant rolling hills that zap energy, especially for those trained to do long climbs followed by extended descents.

2. Weather: Another reason is that the Palmer Divide weather can cause riders to spend extra time checking the forecast. The changing winds, unpredictable precipitation, and cooler temperatures can be hard to manage, especially for out of towners.

3. Spectacular Views: The last but most important reason that the landscape of the course is important is that it has spectacular views. The mountains are visible nearly the entire time (unless you’re headed due east or have your head buried on your bars because you’re suffering….) and it’s a great opportunity to see three 14’ers (if you’re not familiar with the term “14ers,” it refers to the peaks being over 14,000 feet above sea level – Colorado has 53 of them). The visible 14ers , when you are facing the mountains, are Pikes Peak (14,114 feet) to the south, Mt. Evans (14,265 feet) in the middle, and Longs Peak (14,259 feet) to the north. On certain roads, when the weather is clear, you can see all three peaks. It’s amazing and quite a treat, even for Coloradans who are used to seeing mountains on a daily basis. So amazing, that the original Riding Gravel logo was inspired by the views (this site originally started as a place keep track of these rides). Take a look at the logo below. Do you see the three peaks? The shorter Pikes Peak on the left, the towering Mt. Evans in the middle, and the slightly shorter Longs to the right. 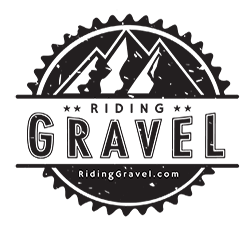 The beautiful area and views, combined with unique terrain for Colorado and seemingly endless gravel road provide a great option for getting out with your friends for a fun and challenging day on the bike! Don’t miss out!

If you’re interested in challenging yourself to an early season event that has been used as a training ride for many Dirty Kanza, Tour Divide, and Colorado Trail Race finishers over it’s first three years, the AntiEpic may be for you. At 160 miles in early April, it is definitely a beast and only a handful of riders complete it each spring. The course covers most of the Palmer Divide and works it’s way from Monument, Colorado northeast to the small town of Deer Trail before turning south and southwest to finish out a very challenging loop. The 2015 version is on Saturday, April 4th. In 2014, there was a 50-mile option as well. The 50-mile option will likely happen in 2015, but on a different, later date.

Later in the year there are two very popular rides that we created back in 2013. The Pedal 50 and Greenland Gravel Grinder both take place in the same area and cover similar terrain but take different routes. These are sure to be near 200 participants in each in 2015! Both of these events are fundraisers for local organizations.

Discuss and share your questions or thoughts about the event and other rides on the Riding Gravel Forum.