The Almanzo 100 is, quite likely, the most popular grassroots gravel grinder event in the nation. Started by Chris Skogen in 2007, the free event has grown to have over 1000 riders yearly and encompasses three events ranging in distance from the original 100 miler to the crushing Alexander 380 which takes participants through three states and takes well over 40 hours to complete.

Riding Gravel had an opportunity presented late last week which allowed us to have the distinct honor of being at Checkpoint #3 for the Almanzo and Royal 165 riders. We teamed up with the folks from Challenge Tire to put on a bacon fueled stop for the weary riders that were battling 25mph-30mph winds and cool, (for May), temperatures. The conditions were tough, but the riders we were honored to serve were a gritty bunch who smiled and pedaled on through to the eventual finish in Spring Valley where they had started, some over 12 hours earlier in the day! 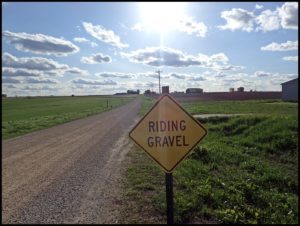 Riding Gravel sincerely would like to congratulate all those who took the start line on Saturday, and we hope that if you were able to partake of our efforts, that you were well served.  It was an amazing day from the standpoint of the wind and road conditions.  We saw many riders who were working hard and giving it their all in an effort to conquer the challenge of these special roads.

Riding Gravel would like to thank the Spring Valley Tourism Board, Cherry Grove, Penn Cycle, Challenge Tire , and all the riders of the Almanzo 100 and Royal 165. We hope to see you all out there again next year.

We’ve created a page to share an album by photographer Adam Morgan who captured over 800 Almanzo pictures. Head over HERE for Adam’s photos.