This review is a tag-team affair! Both Grannygear and Guitar Ted were able to check out this model of eye wear from Bolle’. You may have also seen the review on the Bolle’ helmet here, and these glasses were a part of that. Read on to see what this dynamic duo of gravel thought about these sun blocking shades. 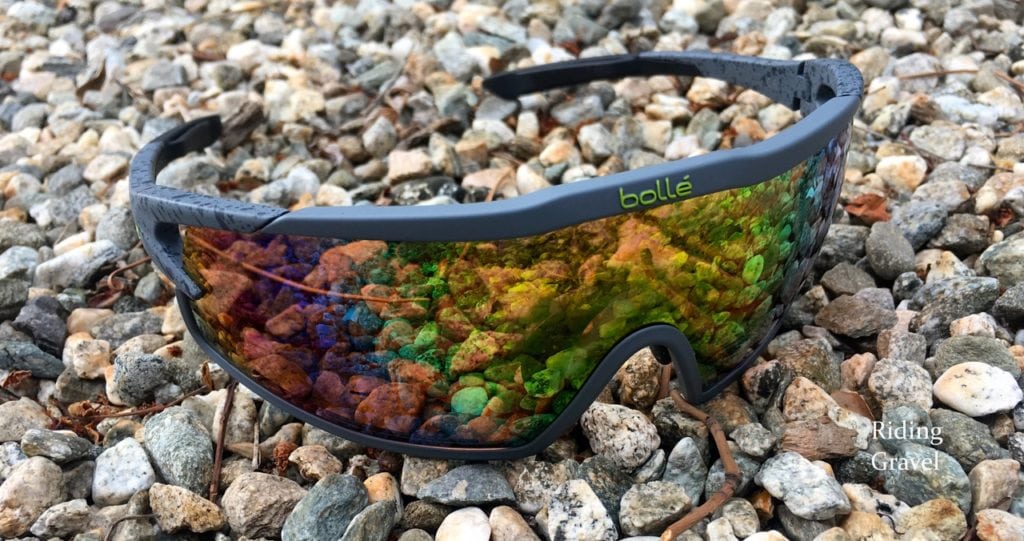 The Bolle’ B-Rock glasses on the rocks. Shaken but not stirred!

The model we have here is the matte smoke frame/modulator brown emerald oleo AF version of the B-Rock glasses. There are several B-Rocks with different color frames and lenses, but all are very full featured. Check out the webpage on the B-Rock here. 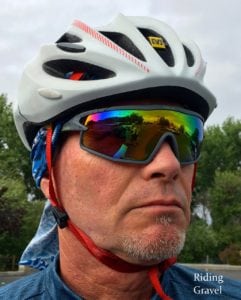 Where the helmet was not quite a hit, the B-Rock glasses were….kind of. Stay tuned…. Grannygear used these on road rides, gravel rides, and MTB rides over varied sunlit conditions, including dappled trails that dive in and out of shadow. Grannygear said, “I never felt like my vision was impeded, in fact if anything, it was enhanced by the lens on the B-Rocks“. Guitar Ted used them on commutes, casually around town, and on gravel rides of several distances. “I thought the way the B-Rocks handled Sun was unobtrusive”, said Guitar Ted, “I didn’t notice any negative artifacts or problems in shade. They just kind of disappeared in that regard when I was wearing them.”

The frames are full figured, so you need to determine if that is OK with you. Grannygear did not find the frames to be in his direct field of vision and said, “Although I could see them if I tried, it was not a bother. One thing I did notice is that big frame does make wiping sweat out of your eyes a bit harder while riding as it takes up a bit of room. Still, the wind and sun do not sneak around that bigger lens“. Guitar Ted added that, “Yeah, that was a pain sometimes. The lenses are almost like a goggle in that respect. If you have to wipe or itch anywhere near your eyes, it can be sort of a bummer.”

Clarity is quite good too, and both Grannygear and GT could not see any distortion in the curved lens, even at the edges. We were told that the NXT lenses are very durable and scratch resistant. Grannygear said, “I never put a dent or mark in them during testing. So far so good. I really like this particular tint. It makes colors pop and shadows lessen, but I get along well with a bronze-ish tint”. Guitar Ted said, “I agree, the lens tint was great. It didn’t seem dark enough at first for really bright Sun, but it was just fine, actually.”

The comfort was very good for Grannygear as well. The nose piece is adjustable and soft as well as being replaceable. The ear tips are bendable to your liking. Grannygear did say,”Although I did find them a bit fat to slide under the helmet straps and head wrap I wear, the B-Rocks never migrated down or slipped around on my face”. Here is where Guitar Ted had a bit of an issue with the B-Rocks: “I thought these were fine on shorter rides, but on longer rides with fresh gravel, which makes things rough, the glasses felt too heavy and slid down my nose often due to this. I tried adjusting the ear tips and had the unfortunate experience of having the bow snap like a twig in my hand. I was shocked, to be honest, that it was so easily broken. I have other pairs of eye wear that seem to have more bendable bows and seem to be tougher in that regard. 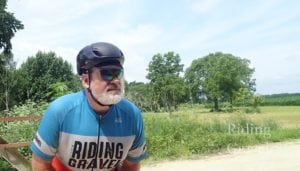 Guitar Ted with the B-Rock glasses on.

$189.00 is the MSRP and that is a bit of change (We are seeing them for much less $ on the internet), but the lens clarity and comfortable fit is top notch. They also feel substantial, not flimsy, so that may be good (Grannygear) or bad (Guitar Ted) depending on who you are.  We are believers in spending money where you get the most for that expenditure. Great wheels. Shorts that do not chafe. Technical eye wear that protects our vision. These split the difference between our two testers. One loved them, the other, not so much.

Note: Bolle’ sent over the B-Rock eye wear at no charge to Riding Gravel for test and review. We were not paid nor bribed for this review and we always strive to give our honest thoughts and views throughout.