Editor’s note: We don’t always ride, and sometimes when we do, it is purely for the joy of riding. That’s where “lifestyle” clothing comes in. Lifestyle clothing is a big deal in the culture of cycling. We take a look today at a couple of pieces from Chrome Industries which Grannygear recently put through their paces. 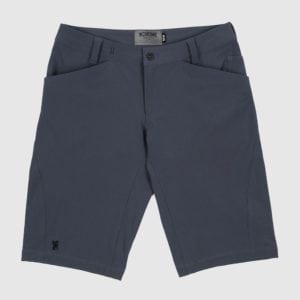 Inspired by NATO military shorts and mountain biking baggies, we made our Union Short to be functional and durable. Updated with some kick ass new urban cycling features – The Unions now rock a second rear pocket with a hideaway reflective hit that only shows when you’re on the bike, a zip-close rear pocket and full-length gusset. Our durable 4-way stretch Everest fabric provide hours of comfort in the saddle or sitting on the grass, our Union Short works on the bike and in the bar.

Over the years I have reviewed quite a few items. Most of that is a big blur of stuff. Some stuff gets given away cuz’ it’s not good for the soul to accumulate like Rockefeller (“Just a little bit more”). Some stuff works fine but may not really ‘fit’ my needs or likes, so it sits around. Some stuff….every once in a while, in a blue moon…will stand out as a complete win for me.

The Union shorts by Chrome are one of those things. Basically I have lived in them ever since I pulled them out of the package, a bit of an overstatement of course, but not much of one. The day they arrived I had a long car drive ahead of me and I wanted to be comfortable and yet not look like I was traveling in my jammies. My destination was a nice resort 5 hours up the coast celebrating my wedding anniversary. My target goal: to be stylish, yet comfy and cool. Timing being what it is I grabbed the Union shorts in that nice blue/grey color (say no to black), paired them with a sharp, button up, short sleeved shirt and hit the road. I could not have been more happy.

Since then I have: 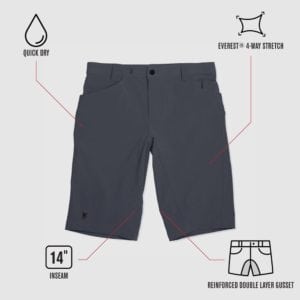 I took them on vacation to a fly fishing lodge, went cavern walking in them wearing water shoes and a T-shirt, then brushed them off with a damp cloth and wore them to dinner with that fine Merino Henley up top.

The slight stretch in the fabric, the cut that seems to defy tugging and pulling and bunching, the longer leg length (great for taller folks and our leggy-ness), the smartly done and functional pockets, the fabric that beads casual moisture and does not wrinkle….and they are really solidly made or so it seems to me. They look like they could take some use and abuse. I love them.

What I have not done much is ride in them, but casual pedaling did not show any real reasons why not to. I think they would make fine around town riding shorts and maybe even more. Bike packing maybe? Not sure how breathable the fabric is though, so maybe not. Still, quite versatile.

They are out of stock right now but as soon as they are back in, I am picking up another pair. Maybe two pair. Too good not to. Note that the sizing at the waist runs just a bit tight. The size 32 on me was right at the limit of allowing me to wear it and still tuck a shirt into them if I wanted to. A size 34 works well though, but is juuuust slightly big. If they made a size 33, that would be da’ bomb. 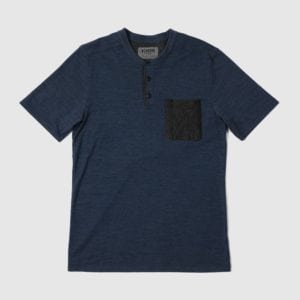 Originally worn by English rowing teams in the 19th century, the Henley shirt has a long tradition of blending athletic performance and style. Our Merino Henley is built with 65% Merino that naturally regulates temperature, wicks away sweat and doesn’t hold odor. We added a little extra length in the sleeves and waist to keep you looking fresh whether you’re down in the drops or out for a night on the town. Handsome, tough and built with performance fabrics that keep you cool from the bike to the bar and back again.

I have not worn this quite as much just because it has been such a hot and humid summer. And even though merino wool is amazing when it comes to working across a wide variety of temps and conditions, even the local sheep have been stripping to their skivvies as summer in So Cal is crushing us right now.

That said, I did get into it a few times before the oven went to 11. It’s a nice blend of dressy casual with a small chest pocket featuring a pen slot. The fabric is not heavy at all, more t-shirt level. The feel of it is nice against the skin too, not anything like old wool clothing used to be. The new blends are very nice to wear and live with.

I feel like I have given the Merino Henley short shrift just with the timing of the summer and all, but it has to cool down sometime…doesn’t it?…and then I expect to put the Henley back in play.

NOTE- Chrome sent over the shorts and jersey to RidingGravel.com at no charge for test and review. We were not paid nor bribed for this review  and we strive to give our honest thoughts and opinions throughout.

All pics courtesy of Chrome.