Editor’s Note: This time on our Light Round-Up we get down to the nitty-gritty and actually look at a light, this time from Lezyne. Grannygear gives us the lowdown following…….

I was invited to Lezyne HQ when they first began to manufacture LED lights many moons ago. While the new Lezyne lights are more advanced in light output and options these days, one thing that impressed me then and continues to impress me now is how well they are built. They all look like serious pieces of gear, not like a toy. The 1100i continues that ‘brick house’ look and feel to it.

And that is just the outside. It gets better from there.

Let us look at what we have here. From the Lezyne website :

Our ‘Loaded’ package came in a hard storage case (plastic box) that would survive getting tossed into the back of your truck, a nice touch for long term use. We have the Infinite Light option which means we have a separate battery pack, that, when combined with the internal battery in the 1100i, extends your run times a whole bunch. How much is a whole bunch? 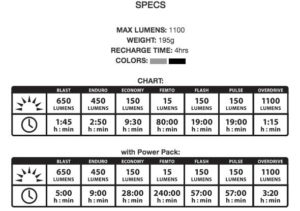 If we just take the light on Overdrive mode (1100L), the 1100i by itself will give you a claimed 1:15 hrs/mins run time. With the Power Pack attached to the 1100i, the claimed run time on Overdrive is 3:20 hrs/mins. An extra two hours on high is pretty impressive. If we look at the light run times with the Power Pack in the 450L/Enduro mode, a more likely light output to be using long term, then the run time stretches to 9 hours. Very nice.

The 1100i uses two LEDs to get to the 1100L level. It is a nice size, not too large or bulky, and mounts to the bars with the now almost standard rubber strap (not a cheap O-ring type). The mount has proven to be quite stable in use and the light can be twisted on the mount side to side which allows you to not only point it at an angle if needs be, but also allows for getting it out of the way to attach the mounting strap. Included is a “U” shaped rubber piece that grips the bar better, although I have used it without this and it still worked fine. In fact, I wonder if this U piece is intended for smaller diameter bars as on my drop bars I could barely fix the strap end to the hook.

The Power Pack extra battery is just slightly bigger than the 1100i itself. It has a rubber faced Velcro strap and buckle for holding it to the frame and there is a soft neoprene pad where it sits against the bike. I did not have any issues with it moving around and putting it against carbon should be fine. The power cord out of the Power Pack is just a couple inches over a foot long so it is not too much cable to deal with. There is a sealed hatch on the back of the Power Pack that covers the charging port as well as a USB OUT port that can be used to charge your phone, etc. Very nicely done. At the ‘front’ of the Power Pack is a status LED that really is just used when charging the Power Pack. 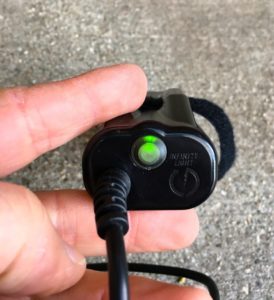 One thing to keep in mind is that the 1100i was designed more for mountain biking than gravel per se. And this first shows in the beam pattern. It is luxuriously broad and diffused. It lights up your entire front tire, all the ground around it, then side to side and up to the sky at what seems like darn near 90 degrees. I cannot see any odd artifacts in the beam. My impression of the light color is that of a warmer tint to the LEDs that was easy on the eyes.

The modes are grouped into basically two sets: 7 modes from highest to lowest including a Flash and Pulse, and one mode set that is only Overdrive and Economy, so basically 1100L to 150L. This points to mountain biking as well in the way we would typically climb very slowly at a low speed and with a low light level, then turn around and blast it downhill with the 1100L setting. That makes sense for MTB but not so much, in my opinion, for gravel riding.

So now the good and the not so good.

The Good:
Brick you-know-what house construction.
Solid mount with adaptability for oversized MTB bars and even some shaped (aero) road bars I would bet. No jiggly-wiggly-ness.
Warm tint to the LEDs is very eye friendly.
Very smooth and even light pattern.
Infinite light Power pack option is soooo killer. Basically you have an all-in-one light AND an external battery light in one set of goods. This allows you to scale up or down as needed. Very smart idea.

The Less Than Good:
The light pattern is very floody; wide and dispersed. This is both good and bad. Bad-wise, It means that there is not much ‘throw’ to the beam and I could feel like I was outrunning the light at times. It also would shine into my eyes if I was out of the saddle pedaling and leaning forward. It could use a ‘visor’ on the top of the light shell.

That darn UI (user interface)…I HATE having to roll through 6 modes to get back to High once I leave it. So the optional mode that offers only the Overdrive and Economy settings, toggling between the two, would be best, yes? Well not so fast. The low level of the two is Economy which is 150L and while that makes sense for MTB riding where you may climb at 4mph for an hour, and 150L is fine for that, a gravel bike will likely see much higher average speeds, say in the low double digits. So when I was in this dual mode setting, I would outrun the Economy setting really quickly but then Overdrive at 1100L was more than I needed and was burning free electrons at a good clip.

Comparing it to the Niterider 950 Boost and final thoughts on the beam pattern and the U.I.

I compared it to the Niterider Lumina 950 Boost as I did all the lights on test. That gave me a constant to go by. In comparison the Niterider has a very concentrated beam pattern and it barely illuminates your front tire (this light comes from the Road section of their offerings). Standing over the bike with both lights running on high, then covering one light at a time with one hand, I could get an idea of throw and such. The broad beam of the 1100i seems less than 1100L to me, but I think that is because so much of the light output is going sideways and up and down where frankly it is wasted. The Lumina punches straight downstream.

However there is this to consider. After riding with the 1100i for a bit, I turned it off and switched on the Lumina. Oh…that is odd. I immediately felt ‘claustrophobic’ in a sense, as I had gotten used to the wide, warm, and frankly comforting beam pattern of the 1100i and when I went to the Lumina’s tunnel beam and whiter tint, I noticed eye strain beginning. I missed being able to see so much of what was around me, even when it was not directly in my path. So, there is something to be said for what the 1100i does with the light it puts out, but I do wonder that if one optic of the pair was more narrowly focused that it might be a better gravel light.

(Editor’s Note: While all the floody light may seem like a waste, it does allow for you to have more reaction time if, say a wild animal, (rabbit, squirrel, or deer) were to run across your path, and it also would allow for one to see a dog earlier, if you should encounter one. I would agree that with a “spot” and “flood” option being offered it would be a better light.)

The 1100i is also a light I would want to use together with a helmet light, especially one with a spot beam to it. Then I could run the helmet light when I needed to see further downrange at speed.

So since the ‘Overdrive’ dual mode left me wanting, I used it pretty much in the 7 levels mode. When I did this I found the light was very usable at gravel bike cruising speeds to at least three power levels down from high with the 450L Enduro mode still being quite good. If I could custom program the light to use it’s dual-mode setting between the Overdrive and Enduro modes that would be bliss for gravel in my opinion. Often I put it in the Blast mode at 650L and just left it there, enjoying a very nice, very wide swath of light to go by.

While not a gravel specific light…whatever that may be…and despite the wonky UI and perhaps wide to a fault beam pattern, the Lezyne 1100i is a compelling light for endurance gravel and certainly for more adventure based riding where the long run times of the Power Pack and the generous light pattern would be a real boon. It even includes a low-low-low light mode for walking along if the situation warrants and you find yourself afoot. It is well made and backed by a company you can actually call and talk to…something that might be impossible for a bargain, direct to you, Chinese light offering.

It’s not my favorite gravel light of the bunch, but the Lezyne 1100i with the Power Pack is still one to consider.

Note: Lezyne sent the 1100i Power Drive at no charge to Riding Gravel for test and review. We were not paid nor bribed for this review and we strive to give our honest thoughts and opinions throughout.