Editor’s Note: In the merge with Gravel Grinder News we knew there was a wealth of reviewed tires, bicycles, and components that might be a good resource on the new site here. With that in mind here is a condensed version of a review that originally appeared on Gravel Grinder News. Any updates on these reviewed products will appear at the end of the article. Thanks and Enjoy!

Introduction: This review on this particular bicycle is a bit unique, perhaps, in that the person reviewing the bicycle, (Guitar Ted), had an influence on the design of the bike. Secondly, although the bicycle is a 2014 model, it is being carried over as a 2015 model, largely unchanged, by Raleigh. First, there will be a bit more background given on the nature of Guitar Ted’s input on the bike and following will be a condensed version of the original three part review from Gravel Grinder News. 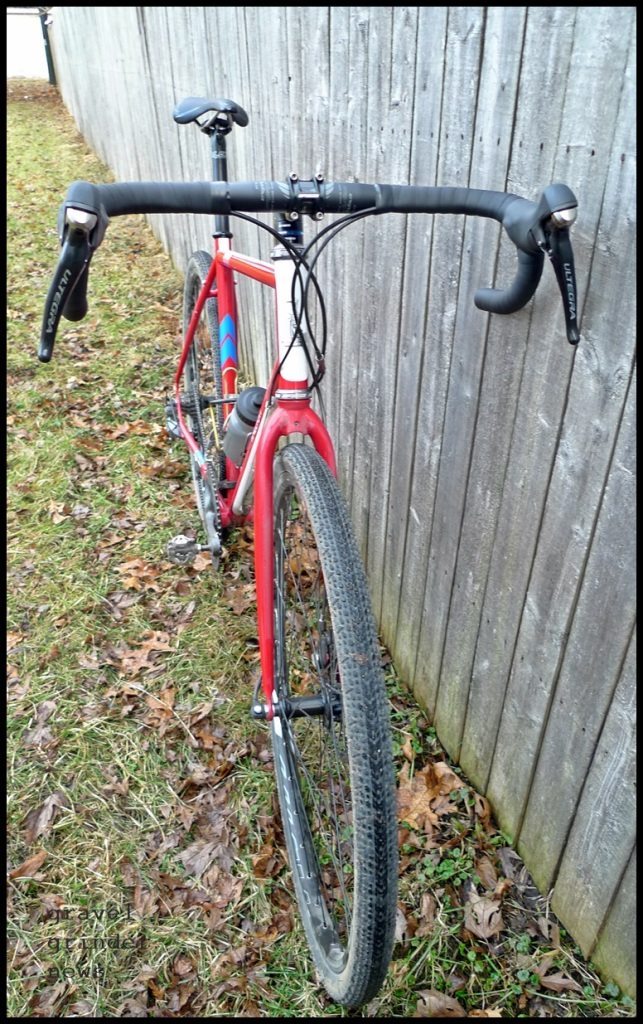 In The Beginning: Raleigh had purposed to build a gravel bike by 2012, and sometime during that year, Raleigh product managers and engineers reached out and spoke with yours truly about what I would do if I were to produce a gravel road bike for Raleigh. Keeping in mind that it had to fit Raleigh’s traditions and be a sellable product, I gave them my input on the proposed bike.

My input on the bike apparently was something that made an impression, since many of the suggestions I gave them made it though to the final product. In an effort to be transparent, I will list what things I suggested here that Raleigh ended up using:

I will also add that these have been my opinions for a minimum basic gravel set up. The basic differences from standard cyclo cross bikes are the bigger tire clearances, slacker head tube angles, (than many cross bikes), and lower bottom bracket, besides the frame material, which I suggested should be steel. Finally- I didn’t know going in if this all would be the best thing since sliced bread, or a huge failure. I was basing my theories on my previous experiences observing riders on gravel, talking with them, riding in events myself, and from my experiences on several geometries used on gravel. One more thing to add…….

I purchased the bike here on review with my own money. 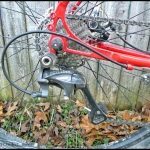 The geometry was arrived at to lend stability to the rider at speed on loose, deeper gravel roads. The geometry is quite different than that of a typical cyclo cross bike. Featuring a lowered bottom bracket, slacker head tube angle, and slightly longer chain stays, the theory was that these things would indeed bring the rider more comfort, control, and not sacrifice speed on gravel roads. Indeed- it should actually increase speeds on gravel roads due to its better handling. 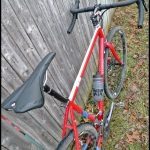 The Tamland is made from steel, Reynolds 631, to be exact. Raleigh went to Reynolds when they were developing the Tamland with the intentions of using an 853 tube set. However; it was changed to 631 on the insistence of Reynolds when they learned it was to be a more vibration reducing design for gravel. 853 being deemed too stiff for the application. The tubes are tig welded into a frame with a slightly sloping top tube and a large opening in the main triangle for frame bag usage. The fork was designed to have plenty of offset to keep the front from being too floppy, help mitigate gravel road vibrations, and features a nice radiused curve for that “retro look”. (NOTE: Some 2014 Tamlands were sold with straight blade fork legs due to the unavailability of the curved blades for a time.) The frame features two water bottle bosses in the usual locations and a chain hangar on the drive side seat stay. Rack and fender mounts are also featured. 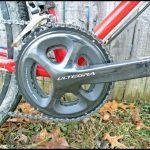 The drive train is an Ultegra 11 speed affair which uses a “mid-compact” front chain ring set up consisting of a 52T/36T combination and an 11 speed cassette with an 11-32T spread. Shifters/brake levers are Ultegra 11′s as well. Novatech disc hubs spin 14 gauge stainless steel spokes, alloy nipples, Weinman KMax Pro single eyelet rims, and Clement MSO 40mm tires with tubes. (Plenty of clearance on those tires, by the way.) Stopping is by disc only and that by the new TRP Spyre dual piston mechanical brakes. (Both pistons move to contact the rotor unlike most mechanical disc brakes.) Cock pit parts are mostly an FSA affair with their Energy range being represented by the stem and handle bar. The bar is covered with some nice, grippy tape as well.  Using a traditional road drop, these bars should appeal to road bikers coming over to ride gravel. The head set is an external 1 1/8th FSA unit. The seat post is a Raleigh branded, two bolt style clamp with set back that is actually quite nice for a house branded component. The saddle on it is a Pro Logo Kappa Evo with a nice, grippy cover.

The ride feel of the Tamland was immediately apparent within the first few miles. The feeling of smoothness was uncanny. I eventually pulled over to check the tire with a squeeze, fully expecting to find that I needed air, and me without a pump! The thing was, the tire was fine. The smooth ride feel continued in the front of the bike as well, showing that it wasn’t just the rear end of the bike, but the entire front end and the fork were working in concert to damp vibrations and mitigate bigger impacts.

So while the Tamland Two is smoother than most bikes, that doesn’t tell you much about whether or not the geometry is worth it here. In terms of handling on gravel roads, so far I think the Tamland is firing on all cylinders with this lower bottom bracket, slightly slacker head angle, and longer fork offset. Purposely pushing the bike into loose patches of gravel on my recent rides shows me that the stability necessary to keep the wheels underneath you and give the rider confidence that the bike won’t swap ends is there.

Given that I, as the reviewer, had a hand in how this bike was designed, one could be forgiven for not taking anything said here with any credence. However; if this bike was “wrong”, had deficiencies, or if there were shortcomings, (and there are a few shortcomings), then I am not one to be inclined not to say so. I have no horse in the race. If the Tamland stinks, then it’s no skin off my teeth.

With that said, I was disappointed in a few things. The aforementioned stock gearing raised eyebrows wherever I showed the bike off. Perhaps Raleigh could not spec a more reasonably geared crankset, so if that is the case, one could forgive them that. However; the replacement gear that works, (a 46T Ultegra 11 speed ring), while available, is astronomically priced. (Note: The Tamland One, with a more “standard” FSA crank, would be much easier to customize gearing with.) There also is no third water bottle mount, which hinders the longer ride capabilities. Finally, The stock FSA bar was a clunker, and unless you never use the drops, it probably will end up in the parts bin if you buy this bike. 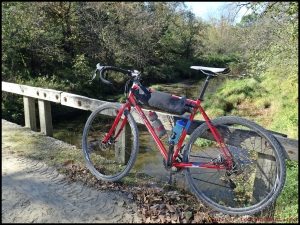 This bike could also stand to be somewhat lighter as well. It wouldn’t take much to shed a pound or two here, and a great place to start with that would be with the Tamland’s wheels. That said, these wheels have been stout and with the wide rims, any tires you mount get a nice volume and better ride feel.

Even with all those niggles, the Tamland sets the bar high from a handling and comfort standpoint. This bike is really smooth and in deep gravel  is dead stable at speed. The bike can easily handle up to 43mm tires with clearance and with the excellent TRP Spyre brakes and Ultegra 11 speed shifting, it is a bike that functions as well as it handles. It does what a long distance gravel rider would want with the ability to easily carry a frame bag or a trunk bag on a rack. Beyond the gravel the Tamland still shines as a commuter, a light touring rig, and could be the only road going bike you’d ever need.

The bottom line though is this- The Tamland is the standard by which gravel bike specific design will be judged going forward. It is hands down the best handling bike on gravel I’ve ridden to date.

Note: Guitar Ted bought this bicycle and is not being paid nor bribed for this review by Raleigh, or any of the component manufacturers represented on the build. I will strive to give my honest thoughts and opinions throughout.