Editor’s note: Grannygear, our SoCal friend and editor over at TwentynineInches.com, is also a back road, gravel riding fan. He has written reviews for us previously and here we share his latest project- A titanium framed gravel road rig from Lynskey. His introduction to this bike can be found by clicking the link HERE.

After swapping all the parts over from the Salsa Warbird. which did come over just fine except for the bottom bracket, the Lynskey GR250 weighed in at around 22lbs with pedals and cages and so forth. I am not counting grams on this one, so good enough. I did note a bit more seat post extension out of the frame which is nice. The front center and cockpit of the GR250 is longer than on the Warbird. The slacker head tube angle and increased fork offset, when combined with a steeper seat tube angle, pushes the front wheel out a bit farther into space.

I began with the 100mm stem but speaking with Lynskey, they had suggested a slightly shorter stem, more in the 90mm range, as optimum for the GR250 and the frame numbers back this up. Time will tell.

One advantage of moving all the parts over from one frame to another- tires, wheels, etc – is that you get a very good feel for what the frame and fork are doing apart from the bolted on bits and pieces. So I should have an accurate assessment of any differences over the Warbird, both for good or for bad.

Of course the Revelate Tangle Bag came over as well, something that I only remove to wash or work on the bike, if then. How did I ever live without one of these bags on a bike? One thing I noted was that the slightly smaller inner triangle of the GR250 over the Warbird resulted in some interference between the seat tube mounted bottle and the bottom of the Tangle bag. Kind of a bummer, but I think I will accept that and enjoy the longer stick-out of the seat post. A compliant seat post like the Lynskey Ti post in a 27.2mm is a big, big part of how a bike rides in the saddle. Oversize (like 31.6mm) seat posts in aluminum and stiff carbon are great for beating you to death.

I could already see the increased tire clearance over the Warbird. The front is huge in that way and the rear nearly as much. In the next installment we will fit up some 650b wheels and tires and see how that all works.

After a quick spin around to check shifting, etc, and with too-long brake lines, and a bunch of spacers on the uncut steer tube, I headed out to see what was what. This is what I noted in the first 30 minutes. I mention that “30 minutes” as I have found that over the years, the first impressions of a bike are the truest. As long as the fit is not horrible or some function of the bike is compromised (broken suspension fork or such things), then what I first notice typically holds true to the end. Also, as the bike is ridden more, any differences between the previous thing you were riding fade a bit as you simply get used to or ‘tune in’ to the new one. 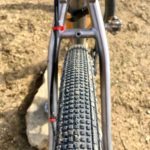 One thing to the negative was the reduced heel clearance right where the chain stays bend out around the disc rotor/drive train to meet the dropouts. I was hitting my heels as I pedaled, not every time, but too much to ignore. Now I pedal a bit duck-footed (heels in) and the left foot is even more that way due to an old injury that never healed right. So I am more sensitive to this than most. For a bit, I was thinking this was a deal breaker for me and the GR250. But I added 2 pedal washers (maybe 3mms?) on each side and took some play out of the pedal spindle that had developed over time and that has been 99% effective in eliminating frame contact. Shows you how close it was to begin with.

There is a ton of room between the inside of the chain stay at the brake rotor, enough to where that tube could be reshaped to allow for at least 5mm more heel clearance. In my opinion this needs to be done, but I may be outside the norm of most riders in this regard.

I have been riding it over multiple surfaces now and I am very much enjoying the bike. It is smooth and very steady on dirt roads and gravel. The Warbird never gave me pause as far as stability, but the GR250 is a notch up in that way and I can get some speed going on here without feeling alarmed.

I have dived into some deeper gravel at good speed and found it holds a line really well, although that type of surface is not typical around here. The slacker head tube angle and the lower bottom bracket over the Warbird works in my favor in this regard. I think the 75mm of bottom bracket drop is a good thing as 42mm tall tires are getting that bike up in the air a bit.

I do think it is less of a road bike than the Warbird was. That extra stability and the longer front center, especially from the head tube angle/fork offset, means that fast turns on the road take a bit of effort to initiate. It’s turns like a MTB hard tail more than a road bike. I could have used the Warbird as a road bike with a tire swap and been okay if my priorities were not too pace line focused, but the GR250 would not be that bike for me. I did swap to a 90mm stem after feeling like my weight was too far over the front wheel and the reach to the hoods a bit much. The slightly shorter stem feel much better and the bike turns quicker now too.

As an adventure/multi-surface approach, the GR250 should be amazing. It is stable, comfy, and smooth, yet climbs with no hint of sway or bending about. I do think the tube set on the GR250, which it inherited form the very popular Lynskey R240, is very well put together for the task.

My last ride on the GR250 was post rain, where the big tires and disc brakes were killer on the muddy bike paths and gravel sections I rode over. It is really settling in to be a good dance partner and I look forward to getting it out on some longer days. I have a good feeling about this one.

Next I will have the trimming done and the 650b wheels fitted with a couple of sets of tires to see how that works. Be back then.

NOTE: The Lynskey GR250 frame and 3T fork were purchased by Grannygear and is being reviewed/tested for RidingGravel.com. RidingGravel.com is not being paid nor bribed for this review and we will strive to give our honest thoughts and opinions throughout.