Tubeless tires for bicycles are not like tubeless tires for most anything else. The proper way to refer to bicycle tubeless technology is actually “tubeless ready“, which implies that the components are “ready ” to be tubeless, but require “something else” to achieve that status. One of those important “something else” items is sealant. Bicycle tubeless tire fans all know this, and we all have our favorite elixirs with which to achieve that tubeless state. Many have even gone so far as to concoct their own recipes and/or modifications in order to achieve desired results. One of the more whimsical solution additives some have used is to add glitter, as you might find in a craft store, to help sealant seal up larger punctures and tears in tires.  However; if you’d rather not go the flashy, home brew route, Effetto Mariposa now offers this new sealant additive for their Caffelatex product dubbed Vtamina CL. 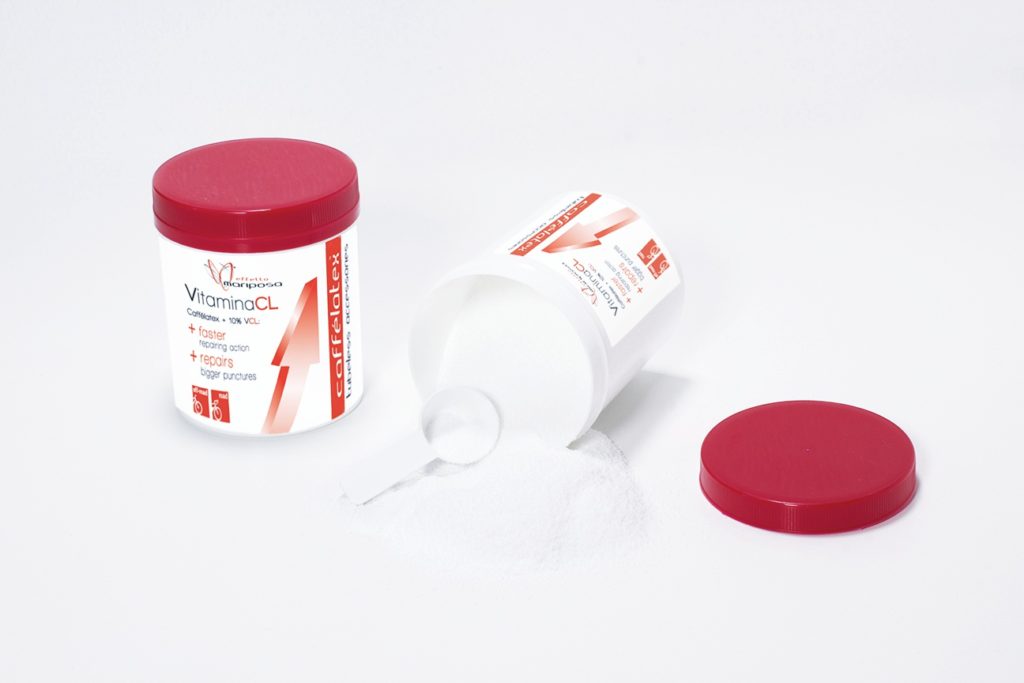 What It Is: Vitamina CL sounds like some gym rat formula that you might find at a local natural foods supplement store, but that’s just the name for this sealant enhancing product. Definitely do not try ingesting this stuff!  Effetto Mariposa says the product is actually small polymeric beads which help Caffelatex, (or probably other) sealants seal bigger punctures more quickly and effectively. Here’s a listing from the Effetto Mariposa website describing this product’s features: 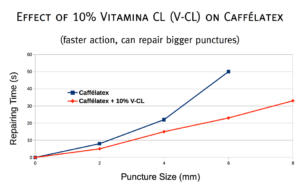 To use the Vitamina CL product it is recommended that you do not try introducing it through the valve since the particles will likely clog the valve’s passageway. Instead it is recommended that you break the bead and dump the amount recommended on the container into the tire. Then remount the bead, inflate the tire to set the bead, and then adjust to the pressure you want to run. Simply riding the bike will distribute the particles of the V-CL around evenly within the tire.

V-CL added to Caffelatex has shown to be effective in sealing bigger holes in less time than straight up Caffe Latex. That is something that would be handy on race day, and in fact, Effetto Mariposa recommends this product for race day use, since it can have the effect of clogging the valve stem sometimes. That said, Effetto Mariposa says that V-CL does not seem to affect the “durability” of Caffelatex adversely. Again, taken from the website on V-CL:

Especially professional cyclists (but also us mortals) sometimes wish they had a “better” sealant for race day or an important event. Instead of adding a more concentrated (and less durable) sealant to our offering, we opted to develop a specific stand alone product, to boost the puncture repairing ability of Caffélatex on demand. One jar of Vitamina CL is enough to enhance 2000 ml of Caffélatex.

Ride Performance: I added the recommended amount of V-CL when I set up the Vittoria Terreno Mix tires we reviewed recently. The only other notable thing besides adding the polymeric beads was that once the tires were mounted I could hear these beads rolling around inside the tire casings when I held the wheels by hand. I could discern this unusual noise when spinning the tires after they had set for a bit if I put my ear near the tires and listened. But while riding, I never would have known the difference, with or without the V-CL.

While Effetto Mariposa recommends using this product for races or special events, I decided to use it as an “everyday sealant” during the duration of the Terreno Mix test. Adding air wasn’t a big issue at any time during the three months the V-CL was in the tires. However; I typically add air in tubeless tires with the valve at the 12 o’clock position out of habit so sealant doesn’t foul the valve stem. This is something I would recommend doing whether or not you end up using V-CL additive, but especially if you do.

I cannot say that I had any big holes sealed up by the V-CL enhanced Caffelatex sealant, but not for lack of trying! I aimed at glass and other road nasties on purpose during the riding of those tires, hoping to get a flat sealed up, but to no avail. Perhaps the Terreno Mix was just too tough!

I did end up pulling the tires after the test was over and I found that by letting the valve core out that the V-CL was nearly successful in sealing the valve. Impressive. Had I put the valve in the six o’clock position, I have a hunch it would have sealed it up, and this despite much of the Caffelatex being dried up. The remainder of the V-CL also was not clumped together in one free-form mass, as with another famous sealant, but was granular and “crumby” instead. The loose crumb-like sealant/V-CL aftermath was easily swept away and discarded afterward.

At The Finish: While I did not have an actual puncture that I was aware of while using the Vtamina CL product, I can say that the near valve closing action when I dismounted the tires was impressive. The sealant additive is expressly made for races and big events, so the bottom line here, I think, is “would I use this stuff“. That answer is yes.

I’ve been in events, races, and on long rides where sealant alone just didn’t quite cut it for myself or someone riding near me in an event. It is frustrating to no end when sealant “almost” works, but it doesn’t. My feeling is that anything that is this unobtrusive and easy to use is worth the extra insurance it might bring. A jar of Vitamina CL runs about $29.99USD and can enhance up to a half a gallon of Caffelatex sealant, so that’s pretty cheap insurance for race day or for that big ride you have planned where a big puncture could really ruin your day.

NOTE: Effetto Mariposa sent over the Vitamina CL sealant additive and Caffelatex sealant used for this review at no charge to Riding Gravel. We were not bribed, nor paid for this review and we always strive to give our honest thoughts and opinions throughout.