While the Imjin 800 from Light and Motion first caught my eye as a potential gravel bike light, the TAZ was something I wanted to try as well. I liked the idea of the “optimized for cycling” beam pattern. Most lights for cycling use a simple round lens or reflector as a way of organizing the output of the LED(s) into something useful. The idea of having that light shaped into a beam specific to riding my bike seemed to make a great deal of sense to me. I have read that in some European countries any high powered bike mounted light needs to have a lens that provides a cut off beam to prevent blinding automobile drivers. Maybe there is something to the thought of a custom blend for night riding off road. A gimmick? Let’s find out.

The Taz line is an all in one light, offered in three levels of outputs: 2000L, 1500L, and 1200L. I chose the 1200L. Experience has shown that I seldom have needed more than 1200 lumens from a light to be satisfied with it, and if I want more than that, I would just as soon have the extra light come from an additional helmet mounted light. 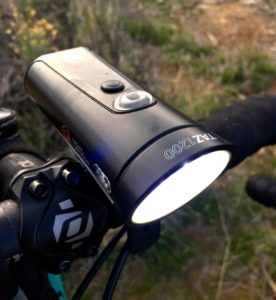 I also saw this as a light that would possibly be excellent for mountain biking, where the Imjin 800 was a bit more narrowly focused to my mind.

As well, when lights get into very high outputs, the low setting creeps up. For instance, the Low setting in the 2000L version of the Taz is 500L. That is quite a bit for Low beam, and much more than enough for climbing up a long, slow grade and likely more than needed for slower gravel bike work.

Let’s look at what Light and Motion says about the Taz 1200.

The all in one bar mounted light that is bright as a car headlamp in a compact size. Perfect for any type of cycling – from serious road or trail rides to daily commutes.
Featuring:
• 1200 Lumen output certified to the FL-1 Standard
• Engineered with a 3 LED array using the highest level CREE LEDs.
• Custom engineered reflector/optics diffuses the bottom LED to cover an ultra-wide spread down in front and focuses the top two LEDs to penetrate the darkness with a far-reaching beam, without wasting any light.
• Beam pattern was engineered to maximize visibility at high velocity with ample beam distance lead-time and the widest beam angle for the sharpest turns.
• Includes GoPro mount interface
• Side lighting to maximize visibility on roadways with a dedicated button to toggle the side lights on/off.
• IP67 Rating – Tested to be fully waterproof in 1 meter of water for 30 minutes

There is a rubber covered charging port and a top mounted power/mode button which also tells you your battery state with the typical changing color LED. As well, there is a second top mounted button that turns on and off the side marker lights, a nod to road or commuting use.

The rubber mount is a good quality rubber strap and hook and the light can swivel on the mount side to side.

There are two separate modes in the Taz 1200. There is a 4 level mode that has 1200L-600L-300L-300L Flash in a typical rotation. To access this mode you turn the light on with a quick press and release of the power button. However there is a Race mode that is activated by a long press and hold (three seconds or so) of the power button when turning the light on. This gives you two levels of light to rotate through – High and Medium. As I understand this, it is 1200L on high, then around half of that in the next level, although I was told two different numbers of what that low level is by the folks at Light and Motion. Is it 600L? it seems less than that, but more than 300L too. Heck if I know, and I only care how it works, so we will contrast that to the Lezyne’s version of a two state mode.

The Taz does not fall to the eye like the Lezyne did, having a less pleasing shape and look to it. But looking at the front lens of the Taz is very interesting. It has the three LEDs arranged in an upside down pyramid and one of the LEDs is behind a section of the lens that it very frosted. The idea is to have the two top LEDs punching out there a ways and the single lower LED provided a wide and close swath of light.

Does that work? Well yes, yes it does and it works really, really well.

Perhaps the best light beam pattern for trail use I have ever ridden with. It reaches as far out as the Lumina does yet it is almost as wide as the Lezyne. Fabulous.

Used on a gravel bike I doubt you would outrun this light. I would suspect the 1500L version to be even more so.
Less need for a matching helmet light with this guy.

The Race mode in the two levels is very well done. Whatever the lower of the two settings is lumens wise, it is really good for slow to moderate speed trail work and gravel roads.

Even though it is wide in its light spread, I do not get any light in my eyes when I am pedaling out of the saddle.

The Less Than Good: 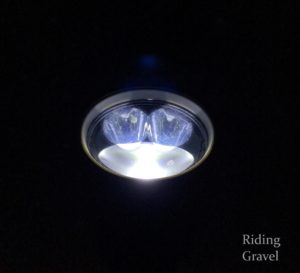 The LED tint is a bit on the Blue/White side, and when running at 1200L, I actually found that annoying in a situation I never would have expected. On one gravel road I have near me, the chunky gravel is reflective enough to bother my eyes. It was distracting and I was having a hard time seeing fine detail in the ‘white road’. It never occurred to me that could even happen. However when running one power level down from High that issue went away.

It has a bit of a bulky profile so it might take up a bit more room on the bars than you would like.

I did have the Taz move on the bars a couple of times when on a fast paved road with higher impacts like potholes…it always tipped ‘nose up’. I was not able to move the mounting strap to the next hole (make the strap tighter) so if I were to use this in rougher ground I would have to add some friction on the bars somehow. I never had it slip on a bike with front suspension, even on rough single track, and it also did not do it on the gravel bike on most dirt roads, but it did happen.

I ran it with the little side markers in the off position most all of the time, but they are pretty cool if you are in a traffic area. I am not sure how much they do, but anything is better than nothing if you are trying to be seen.

I really like this light, mostly due to two things. First is a beam pattern that is just excellent. Excellent for gravel or MTB or whatever. Second is the well executed Race mode that gives you a very usable low setting and a full on high to toggle between. Yay! The Taz could be a one-for-all light…all types of riding. It reaches out farther than the Lezyne and is less wasteful with its light, being broad enough but not overly so. It lacks the super long run times of the Lezyne with the Infinite option but I found it to produce a rideable light even when running on the 300L low setting for slower gravel rides. In the Medium 600L mode it is likely what a gravel guy would use most of the time. If I used it mostly on Medium mixed with Low then run times could be in the 4 hour range. Not enough for all-nighters, but not too bad either. 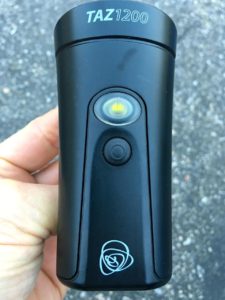 Compared to the Lumina 950, it reaches out as far or farther, yet is much broader in its light pattern. It is also a bit on the cooler side tint wise, something it shares with the Lumina, so that is not my favorite thing. I will put up with that though to get the other good parts. I typically would combine the Taz with a helmet light for MTB or trail use, but I have also used it on its own and its fine with that shaped beam getting around corners pretty well. For gravel, I would be less concerned about adding a helmet light with the Taz. It seems like everywhere I pointed the Ethos helmet light I was wearing, the Taz was already there.

The MSRP was $200.00 however at this time I see the light on sale for $130.00 but out of stock on the Light and Motion website store. Is this the end of the 1200L version? Maybe the 1500L is the new lower level option. Check with Light and Motion. That 1500L model retails for $250.00. That is more than twice the cost of the Lezyne 1100i on its own but close in price to the 1100i with the Infinite Option combo pack. However, you lose the long run times of the accessory battery option that the Lezyne offers.

I like it for MTB a great deal and its quite a good light all and all, but the slippery mount would need to be dealt with for gravel use, especially if you used your gravel bike in an adventure mode on rougher trails.

I really like this light, but it’s not my fave gravel light of the bunch and there is just one left in the original samples on test. Stay tuned…….

Note: Light & Motion sent the Taz 1200 at no charge to Riding Gravel for test and review. We were not paid nor bribed for this review and we strive to give our honest thoughts and opinions throughout.