Donnelly, (formerly Clement), introduced one of the first purpose built gravel tires available with the introduction of the Xplor MSO series. They have been rather quiet on the introduction of new gravel tires since then, focusing rather on the transition from Clement branding and on variants of the basic models they offer already. One such example being the 650B X 50mm MSO which Grannygear is testing now.

The New “EMP” Tire: Now Donnelly has proven good on their word from last Spring’s “All Things Gravel” expo at the Dirty Kanza 200 when the word was let out that a new tire was coming which would pay homage to the flinty roads around Emporia, Kansas where the Dirty Kanza 200 is held each June. Donnelly sent out a press release which said, amongst other things, the following-

The new EMP is Donnelly’s most aggressive gravel tire to date and just might be the real diamond in the rough you’re looking for come June in Emporia, Kansas. 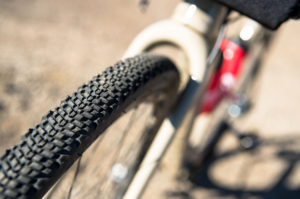 Like other Donnelly tire models you can expect a few variations in sizes and construction in this new model. Right now there is a 700 X 38mm tubeless version which will retail for $72.00. A 60TPI folding version in that same size is also available for $47.00. Right now these are the only versions out, but in Spring of 2019 they intend on releasing a 700 X 45mm variant in both tubeless and 60TPI folding choices. These are slated to retail at $72.00 and $47.00 as well.

There was no mention of any 650B offerings in the press release.

The tread pattern for the new EMP seems to be a hybrid design using the edge knobs from Donnelly’s BOS cyclo cross tire and a variation on the venerable MSO tread up the middle. These tires will also feature an under the tread puncture protection layer. Donnelly says the new EMP is the most aggressive gravel tire they offer.

Comments: The tire looks like a typical, (if we can even say that already after so few years), Kansas oriented gravel tire. First impressions here are that the new EMP looks very similar to a pared down Teravail Sparwood. The puncture protection belt is going to add some mass to this tire’s carcass. There is no getting around that, so we expect that the 38mm size will weigh in the upper 400 gram range. How the tire might ride is anyone’s guess right now, but unlike some company’s tires that use a puncture protection belt that makes the tire too stiff, we’re betting that the new EMP will ride more in line with what we have come to expect from Donnelly tires. That’s a good thing.

We’re hoping to get a set to review, so stay tuned for more.

Note: The images and information used in this post was provided by Donnelly