Editor’s Note: In the merge with Gravel Grinder News we knew there was a wealth of reviewed tires, bicycles, and components that might be a good resource on the new site here. With that in mind here is a condensed version of a review that originally appeared on Gravel Grinder News. Any updates on these reviewed products will appear at the end of the article. Thanks and Enjoy!

Another of the new gravel tires for 2014, the “Gravel Grinder”, is a tire introduced to us privately by Challenge Tires back in February at Frostbike. Challenge has sent over an early production version of the vulcanized Gravel Grinder 38, which isn’t like the hand made, “open tubulars” we’ve tested here before and which have been known to have had issues. This is a vulcanized tire and Challenge assures us it can take the abuse. 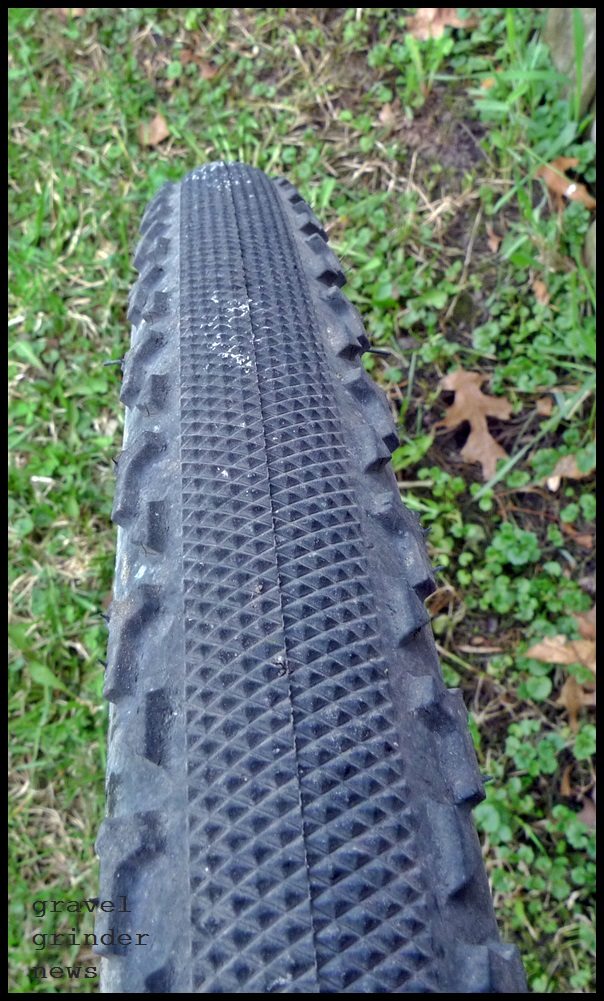 Suggested pressure rating range is 45psi to 80psi. This is not a tubeless rated bead on the casing and Challenge strongly advises against trying these in that manner. Challenge claims a weight for these at just over 400 grams a piece, but our two samples arrived here weighing 370/380 grams, which is a light weight for this sort of tire in my opinion. The casing is supple in the hand and the tire fit snugly on the HED Ardennes+ wheels I have here on my Black Mountain Cycles bike. The tires have a nice, rounded profile on these wheels, as shown to the left here. Once again, they measured out right at 38mm each at 45psi.

First Impressions: The Challenge Tires Gravel Grinder is a fast feeling, smooth rolling tire, which should be no surprise, given the minimalistic tread in the center portion of the tire.  However; it also has a very smooth, damped feel while riding most surfaces, and this was a nice surprise given that I was unsure what to expect with Challenge’s vulcanized casing technique used on this tire.  The ride showed me that a light, wider tire is easier to spin up a long, grinding climb, and having that tire be supple really helps keep the bike floating up and over the rocks instead of spitting them out and pinging around off them, which I find can really upset the rhythm of a climb. Going down I wasn’t sure that the side lugs were helping me stay stable, but these tires did stay underneath me better than some others I’ve had on this bike. On the sandier stuff, these did not show me a tendency to knife in and wash out, so that was another nice surprise here.

Mid-Term Update:  I had been running the Gravel Grinder tire on my Black Mountain Cycles “Monster Cross” rig. I did a few more gravel rides and a whole bunch of commuting. The tires were pounded through pot holes, cracks, and fissured concrete along with my normal curb hopping. This was all done in an effort to try to expose any weaknesses in the Gravel Grinder’s casing. However, I could not find any issues after three weeks of this abuse. So, onto the next phase of testing……

The reason is that the casing is a pretty supple one, even though it uses the coarser 60TPI threads. (Editor’s Note: The hot patch on the pre-production sample was incorrectly stating a 120TPI casing) Despite the non-”Open Tubular” construction, I would give these a high rating for ride feel. Combine that with the smooth, fast rolling tread design, and you have a great tire for a faster paced ride. But what about those side lugs? Do they actually help to stabilize the tire in looser conditions, as I thought they might? Well, the answer is “yes“, but not for the obvious reason. You have to look at the Gravel Grinder a little more closely to figure out why it handles like a bigger, wider tire.

The Gravel Grinder is a true 38mm wide tire, and has a great volume on both the HED Ardennes+ and the stock Weinmann rims on the Tamland Two. The profile of the tire is a shallow “C” shape, and those side lugs? The side lugs sort of make the tire act like a wider tire than it really is. All this “width” is helping the Gravel Grinder roll up and over gravel rather than knifing into it and washing out. The feeling is more stable, more like a 1.8″ 29″er tire, than a 38mm one. Those side lugs effectively act like little “outriggers” more than they actually grab rocks and terrain, as you would initially think they would. To wit: You still get a little lateral “looseness” on the deeper, loose gravel, but it’s more predictable and feels more controllable than a tire of this size should feel.

So the tire is fast, supple, and seems tough enough with a great, controllable feel in looser gravel. 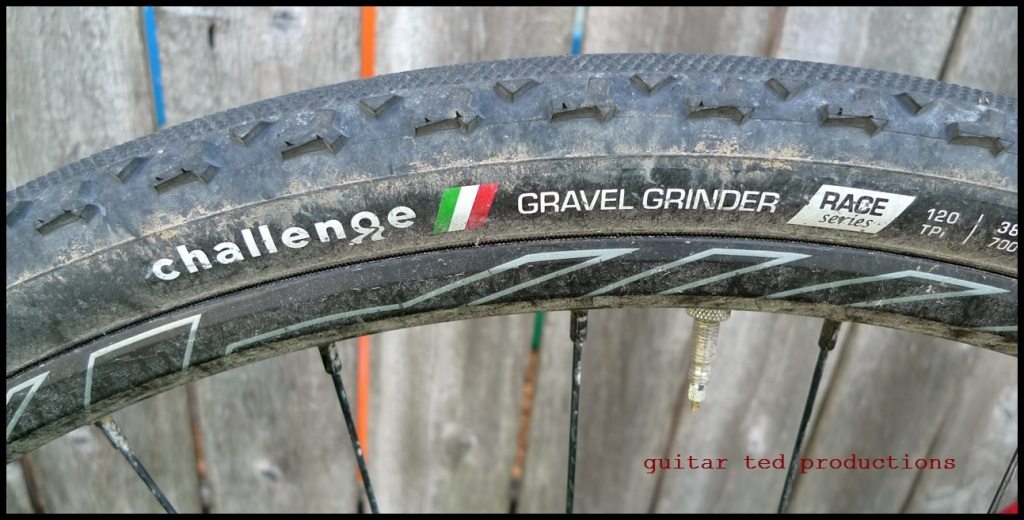 Final Verdict: I won’t waste any time here- The Gravel Grinder tire is a winner. It stands alongside the Clement MSO 40mm and 32mm tires as being, in my opinion, the best gravel road riding and racing tires you can get now. The Gravel Grinder by Challenge, with the vulcanized construction, is tougher by far than their previous samples that we have tested. The Open Tubular, handmade construction used by the previous tires is certainly awesome in ride feel and has no peer, when they hold up. That was the trouble with those samples- they just were too inconsistent in how they worked on gravel roads. Not so these vulcanized Gravel Grinder 38’s.

The tire wear has been impressive as well. The diamond shaped, file tread has held up well, despite lots of paved commute miles. Certainly, they do show wear, but nothing I would deem as out of the ordinary. In fact, I keep looking for something to come apart, show scarring, or excessive wear, and I am just not seeing it with the pair I have on test.

The ride quality is on par with the best of the rest out there and maybe a tic below that of the handmade Challenge tires, so I cannot really fault the tires there. Paved riding is fast, and if you find that you need to cover a lot of paved miles to get to gravel or dirt, these tires are definitely not a hindrance to getting out there. They buzz a tiny bit, and they sing on hard pack, but I found neither to be annoying in my opinion.

The width is spot on for what most folks seem to want, and the tire has the toughness and performance necessary to be fast and reliable. What’s not to like here? Well, I will take Challenge, (and other tire companies making tires for “gravel road riding”) to task here for not getting on the stick and making tubeless tires for gravel road riders. Yes……it is a tiny niche market within cycling, but in my opinion, there shouldn’t be any performance tires made in 2014 and beyond that are not tubeless ready. The wheels and rims may be scarce now, but one can always fall back to using a tube. One cannot always reliably use a clincher tire tubeless. It seems to be a simple solution to all the hand-wringing companies do when asked about tubeless  tires. Some will point to the “lack of standards” and I would counter with “UST”, but maybe there is something to that.

All that aside, for now, the Gravel Grinder joins the short list of tires specifically aimed at gravel road riding that are actually worthy tires for the purpose. That’s probably a good thing for Challenge Tires, considering the cheek in choosing this tire’s name!

Long Term Riding Gravel Update: As of this writing the Gravel Grinder tires were just replaced by a new set of review tires, but these tires will definitely be in the rotation for special events and for faster rides. The wear has been minimal and as stated, I have found no significant issues with the construction of this particular Challenge model.

Note: Gravel Grinder News received the Gravel Grinder tires at no charge for test and review. We are not being paid, nor bribed, for this review. We will strive to give our honest thoughts and opinions throughout.

Discuss and share your questions or thoughts about gravel bikes on the Riding Gravel Forum.