There was a time when converting steel road bikes to fat, 650B sized wheels and tires was a niche that was a pretty popular thing. The road bikes at the time were steel, had a bit more room in the rear triangle, and the forks had wider clearances at the crown which accommodated these puffy tires with a similar overall diameter to a 700c X 25-28mm tire. Of course, when carbon fiber, skinnier tire trends, and an overall focus on Pro Tour and criterium racing all came into vogue, the ability to retrofit a road frame with bigger 650B rubber was lost. It has been many years since the idea has been bandied about, but WTB has reignited the idea now with their Horizon 650B X 47mm tire. 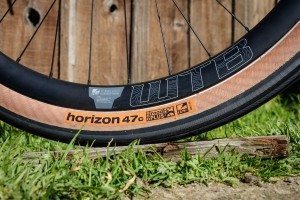 The idea works in 2016 because of the recent proliferation of gravel/adventure road bikes which have opened the door, so to speak, for these 650B conversions to be viable once again. This time around though, WTB has banked on its previous success in promoting the 27.5+ mtb tire and wheel combo and are marketing this tire as a “Road Plus” set up. Touting its TCS tubeless capabilities and an opportunity for riders to gain a cushier ride with more traction, WTB is saying this makes your cross bike, gravel rig, or adventure road bike more versatile and capable across a wider variety of terrain and riding styles.

The idea has legs, as it has been something that camper bikes from the 40’s and 50’s during the 20th Century have utilized. More recently, the rando bikes with “low trail geometry” that are custom made have utilized similarly sized tires. So, nothing new about the intended application or conversion opportunities here. What is new is the tubeless compatibility with a matching road rim from WTB and the marketing.

Cannondale Slate bikes are using tires similarly sized, and while WTB states that this is a tire aimed at those wanting to get “plus” sized rubber into their cross, gravel, or road adventure bikes, it has to be wondered if this portends a release of more bikes fitted with tires like this from the get-go. Like the B+ mtb bikes that have come out in the wake of the WTB Trailblazer 2.8″ tire, will we be seeing a “Road Plus” category of bikes emerging from manufacturers in the near future? Maybe, and if so, a wave of groans about how the bike industry is creating niches and components to part us from our money will certainly be heard from all corners of the cycling world. Only thing is, and keep this in mind, it isn’t really a new idea, as has been outlined here.

Note: WTB sent over the images and information used in this post.

5 thoughts on “Fresh Gravel: WTB Announces 650B “Plus” Road Tire”