Editor’s Note: In the merge with Gravel Grinder News we knew there was a wealth of reviewed tires, bicycles, and components that might be a good resource on the new site here. With that in mind here is a condensed version of a review that originally appeared on Gravel Grinder News. Any updates on these reviewed products will appear at the end of the article. Thanks and Enjoy

So now that I have ridden in rain, snow, mud, wind, and sub-freezing temperatures, it is time for a final say on these new bootie/shoe replacement boots for transitional season riding.

Performance Notes: The Fasterkatt boots were described as being made from materials that “won’t stretch”, and I was cautioned that the fit would not change over time as I wore them. That is true, but the boots have “broken in” to a degree, and if anything, they feel more comfortable than ever. I haven’t noticed any issues with the construction or with the function of these boots other than a minor cosmetic cracking of the reflective stripe on the heel. Besides this, the boots are looking fine, albeit dirty and in need of cleaning!

The rides I’ve been on have featured all the elements of Fall and early Winter riding. On a couple of rainy rides and one snowy ride, I noted that the Fasterkatts did not leak or let my feet get cold at all. This was impressive, as my old set up of my Summer time mtb shoes and bootie covers would always allow some moisture, cold air, and resulting cold feet to enter in and make my rides miserable.

As I mentioned in a previous post, the Fasterkatts are also easily gotten off which I appreciated after a long, cold ride when I was tired and just wanted to get out of my gear as quickly as possible. While this may seem trivial, it really is an important thing to note, especially if you are going to be commuting to a job in these. You won’t have to allow for a time of wrestling with booties before you punch in! Plus, you only have to store a pair of boots, and not two pairs of items.

But I didn’t think the wet rides or convenience was enough to expect from these boots. They are claimed to be waterproof, so I figured, bring it on! I designed a loop testing route that would have me traversing some wet, muddy terrain and then halfway through it, there is a lake. I thought I would stand in the water long enough to shoot a self-timed image, and then finish off the loop. If the Fasterkatts could keep my feet warm and dry through that, I figured that they would likely do well in almost any wet, cold situation. 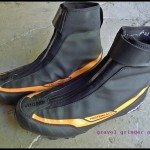 The boots did not leak one bit, and my feet stayed dry the entire ride which was done on a windy day in the upper 30’sF. Very impressive! But what about walk-ability? How would a cyclo cross run up feel in these? I took the time to do some run ups on a dike and up a few steep embankments to find out The Fastrkatts maybe do not have the most aggressive tread on the sole I have ever used, but they hold their own there and seemed to shed dirt and mud well. They also do not hinder your movements much. A little- yes- due to the high upper around your ankles, but I felt that was actually a good thing from a support standpoint. Walking several blocks in these boots was not a big deal either. I felt they were average for a cycling shoe in that regard. While the Fasterkatt has a glass fiber impregnated lug system for slippery conditions, I was not able to test that feature at this time, but if that works, it would be another added bonus here.(Editor’s Note: After getting that opportunity after this review posted, I can report that while the technology is impressive, it is not effective on ice.) 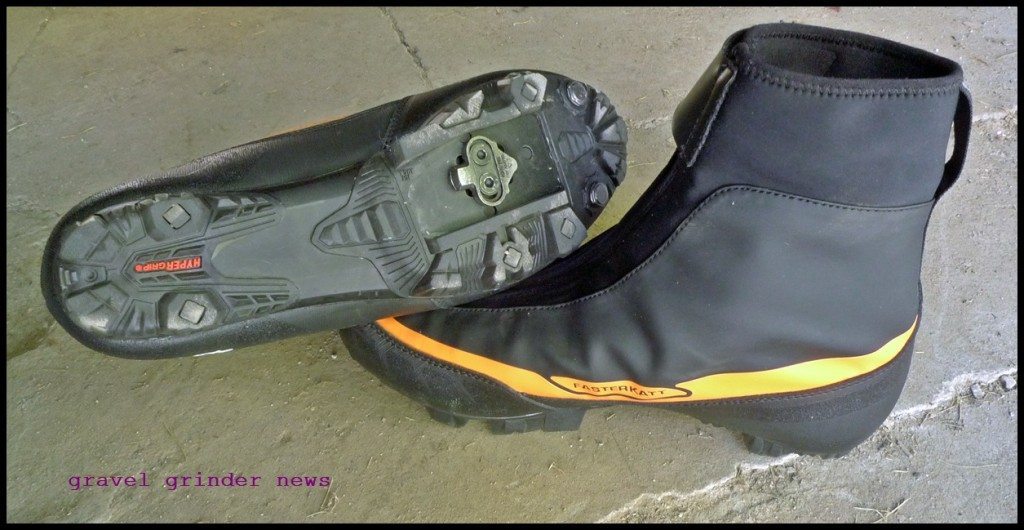 Final Verdict: The Fasterkatt boots seem to have solved the transitional season footwear dilemma for riders that struggle with shoe covers and cold, wet feet on Fall and Springtime rides or in climates where it is wet and cold all Winter. My feeling is that these boots are a highly technical offering with a price tag that, while steep, reflects the level of performance of the Fasterkatt boots…….so far. Of course, one would expect that high level of function to last through several months of solid use, when the Fasterkatts are needed, and should be a long term solution for commuters and gravel road riders. I cannot speak to that long term aspect now, but as far as the initial impressions that I have gotten here, I see no reason not to expect that the Fasterkatt boots will do any rider a good turn for a reasonable amount of time. I really can not see why I would want to ever wear booties over shoes again after trying these Fasterkatts.

If the long term use holds up to my expectations, I see a death blow to boot/shoe covers for many cyclists. The Fasterkatt is a brilliant alternative to the compromises that cyclists have had to deal with for years. It is one of those products that you cannot believe weren’t commonplace beforehand. From the viewpoint of a first effort, the Fasterkatt boots are a knockout, and if 45NRTH finds a way to make these more affordable in the future, I think it is about the only major improvement they could make here beyond some minor tweaks.

45NRTH sent over the Fasterkatt boots to Gravel Grinder News at no charge for test/review. We are not being bribed, nor paid for this review, and we strive to give our honest thoughts and opinions throughout.

Post Ride Refreshments: With over a year of “transitional season” use now on these boots, here are some thoughts on the performance of the Fasterkatt boots.

Okay, so far so good- mostly- besides some nits which have not adversely affected my enjoyment of these boots. I know I have hammered out this point already, but these are soooo much better than separate cycling shoes and bootie covers that I don’t see myself ever using the old way of doing it again.