Stan’s No tubes, the sealant most folks think about when they think about sealant, has introduced a new sealant today, the first since their original sealant debuted in 2002. This new sealant was developed by race teams over the course of 14 years and has now been refined to the point that Stan’s has released it to be used by the general public. Along with this new sealant, Stan’s also introduced the “SRD” division, (Stan’s Racing Development), and a new logo as well. 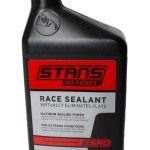 The sealant differs from Stan’s original formula in that the sealing crystals have been changed and new, larger crystals, dubbed “XL Crystals”, have been added to the base formula which is non-toxic as well. The sealant is now said to be very effective in sealing bigger punctures and holes faster than before. This has led to the suggestion from Stan’s that the new SRD sealant only be added directly to a tire, and not via a valve or through an injector, as it will clog valves and injectors due to the new, larger XL Crystals.

The SRD sealant also is claimed to work down to -30°F, so possibly a great sealant for fat bikers. Racing development has shown also that this new sealant can be used more sparingly than the previous formula, since it seals punctures more quickly.  Less air escapes as a result, proving another benefit to the new sealant.

NOTE: Images and information used in this post were provided by Stan’s No Tubes.