Editor’s Note: Riding Gravel welcomes in Grannygear with his take on the new Resolute 700 X 42mm tires. Those of you who ride in territory mostly devoid of what is traditionally thought of as gravel will appreciate his take.

WTB Resolute Tire: A So Cal Viewpoint- by Grannygear

Now let’s get something up front right away…Gravel have I none…well, almost none. Dirt I got plenty of. So I will (for the most part) let Guitar Ted do the gravel part of this review of the new WTB gravel tire, the Resolute. I will dabble in gravel on some semi-local back-mountain roads, but largely I will be using these on a mix of dirt roads and pavement.

That out of the way, I cannot think of anything that so defines the success of a ride as having the right tire. The wrong gearing can certainly hurt ya’ and if the bike does not fit you, well…you know. But the tire is your connection to the land and if that is wrong then nothing is right.

The tires that have lived on my gravel bikes for the last year or two have been a set of Panaracer Gravel King SKs in the 40mm size. Those have been really stellar performers, fast and smooth on pavement with enough casing size and long treaded mini-blocks to hang in there on hard dirt surfaces. I have done some pretty decent road rides on them and I did not feel very handicapped, at least no more so than I would on any other tire of that size and weight and running at 40psi. So for the So Cal area, the SKs are not a bad choice at all, especially if you spend time on pavement, linking together dirt sections as you go. But they do lack in ultimate grip as the dirt surface degrades. If you are on rougher, looser dirt all the time, then they might not be ‘enough’ tire. Mud? Not so good there either.

So it was with a bit of reluctance that I removed the much loved GKs and mounted up the WTB Resolutes. The small knobby profile looked very interesting but I was worried about losing all-round-ness as I ride a decent amount of asphalt on the gravel bikes I own. I had weighed them at 457g and 461g, slightly lighter than the Panaracers GKs which were 477g and 488g. To my eye and my calibrated grip, it seemed I lost some volume in the swap. The 40C GKs are much bigger than the stated size. However after settling in and mounted tubeless at 40psi, the 42c Resolutes measured at 43mms wide on internal 21mm rims. So that is generous and good enough for me and I am a tire volume snob. I feel that you should run the biggest tire that will fit in your bike, considering mud conditions, etc. I could run a 45mm+ 700c tire on the Lynskey GR250, so if I could get an even bigger version of a Resolute, I would likely run it although there is a point of diminishing return on big 700c tires. At some point a 2.1x650b tire begins to make more sense, but I digress.

I had set the tires at installation to 40psi and then left them overnight, heading out for a ride the next day without giving them more than a quick pinch to see how they felt. Pressed for time and too lazy to grab the digital gauge, off I went. My first impression on this 9 mile loop, consisting of about a 50/50 mix of pavement and dirt, was a good rolling performance on asphalt. Not buzzy at all, they seemed to step out well. Looking down at them I could see more tire bulge than I expected and I was questioning if the pressure was lower than I had thought, yet they were rolling pretty fast and not dragging along. Hmmm.

Into the dirt, the first bit is a hard right hand turn off the pavement followed by a short but punchy climb that is washboarded and sandy from car traffic. The GKs, if I was out of the saddle here, would require a dance to keep the rear tire hooked up. On the Resolutes I was able to get weight more forward and still not spin the tire. OK. Within the next mile or so I was struck by how supple the tires felt on small rocks and chaff. So now I was back to “just what pressure are these at anyway?“. The last stretch of dirt is a 35+mph descent on a hard dirt road and there they felt secure and fast. Very impressive first ride.

Back at the Grannygear technical center and laboratory, I whipped out the SKS digital gauge and found I was running 30psi and maybe even a bit less…can’t recall exactly. Since then I have gone up as far as 40psi where they do perk up somewhat on pure pavement, but keep coming back to 30psi as a best all-round setting for my area. 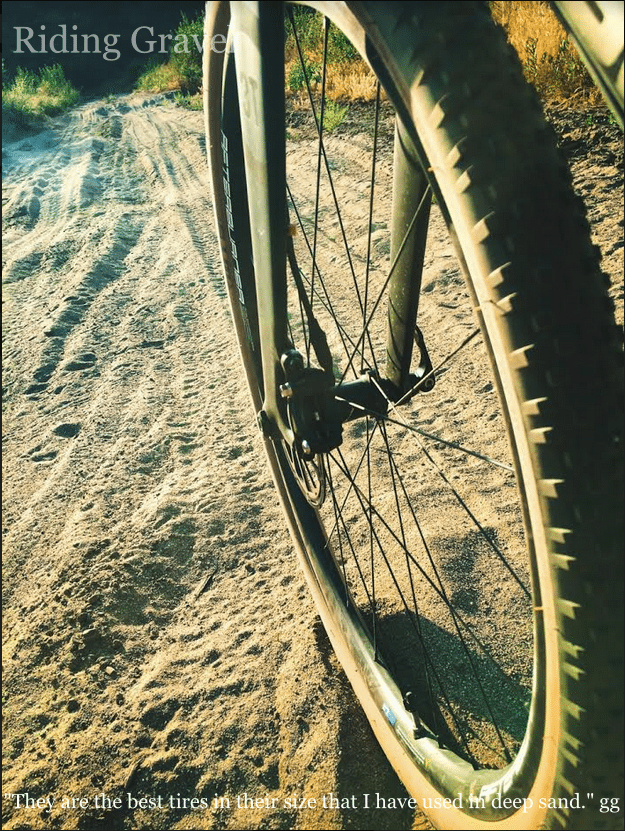 My impressions since then have been very consistent over several rides. They roll better on the road than you would expect for a tire that has the tread and purchase on dirt these have. As conditions degrade, they really hang in there, allowing for some confident cornering even on rubbly over hard packed dirt surfaces. I have not had a hint of them breaking loose in corners and they are at least as grippy as I am brave. One thing I noted that was interesting. They are the best tires in their size that I have used in deep sand. Not just sand, but sand that is too much for a tire of this size, where they just keep on pointing straight ahead and driving forward at least until they run out of flotation or you run out of legs. Remarkable really. You listening, Florida? Might be worth a try.

My last two rides before I wrote this were at a local mountain resort community where I solidified my feelings about the WTB Resolutes. I also found that I need lower gears at altitude when riding gravel bikes where an MTB would be a bit more ‘normal’. Mercy!

These truly are a very, very good dirt road tire. I even found gravel…see image…and it was big stuff too, plied up on concrete-like hard dirt (with imbedded gravel) and moon dust from all the 4x4s and campers driving over it. The road edges had deeper sections and one stretch that I bet was a 25-30mph run-out showed the Resolutes did not search or waggle at all here. Very calm and composed. Speed limits were dictated more by whether I could hold on to the bars and keep my eyeballs from jiggling loose rather than the lack of traction or cushion/volume. 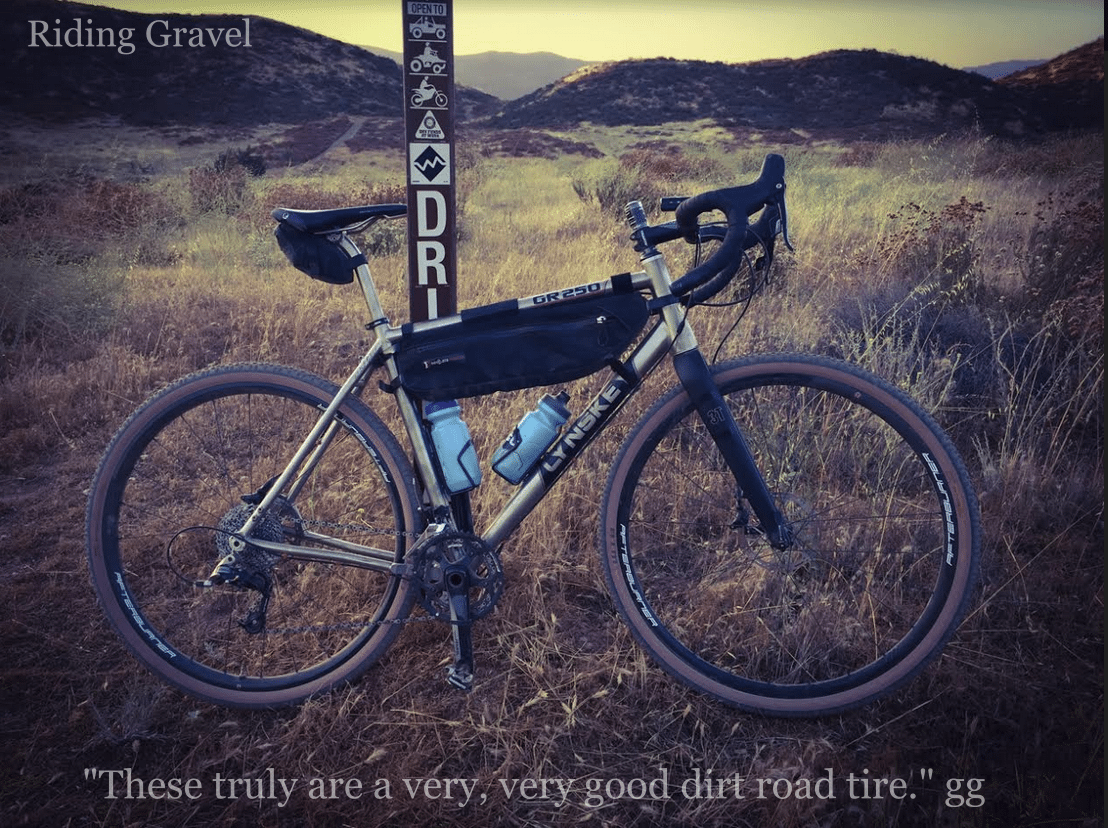 The next day was a road loop around a couple of lakes, 30 miles or so long with a 15mph average pace. I upped the tire pressure to 40psi and rolled out with Mrs. Grannygear on her Slate running some WTB Byways. It’s funny when you ride a tire like this Resolute on the pavement. They are not nearly as slow as you might think they would be. And man are they comfy. Chip seal road surfaces feel like a concrete driveway. Pot holes? It’s like those Chuck Norris jokes: Resolutes don’t get potholed…potholes get Resolutes. No worries. And they are very adequate for the every so often bit of road work. Really they are.

I have to say I am pretty impressed. My typical ride is 70% road, 30% dirt. So the Panaracers do edge out the WTB tires in pure road use, but the off road performance of the Resolutes in my local conditions is a good notch up soooo…I am conflicted. I do think the Resolutes are more supple as they soak up baby-baby head rocks quite well.

I was thinking about tire wear and, looking at the rear tire, I do see some center tread wear as one might expect with so tiny a knob (and not a lot of them). However, it’s hard to have it all. I don’t see them looking seriously shredded so they are not one-race-wonders either. As far as toughness, I have not hurt them even with rocks pinging off the rims, etc, but I do not typically kill tires in my neck of the woods, even MTB ones. There are quite a few sidewall scuffs from yesterday’s fast downhills over that heavy gravel and broken rock and I don’t see any damage.

Every so often a company comes out with a tire that nearly defines the genre. The Resolute just might be that kind of tire and I would love to see these in a 650bx2.0 for more adventure based gravel bike efforts. But for now, these have not given me any reason to remove them.

NOTE: WTB sent over the Resolute tires at no charge for test/review. We were not bribed nor paid for this review and we will strive to give our honest thoughts and opinions throughout.

8 thoughts on “WTB Resolute Tire: A So Cal Viewpoint”