When I first built up the Lynskey, I sampled two sets of Panaracer tires. They were the first gravel bike tires I had ever used. First I tried the Comet Hardpacks, and those were pretty cool with lots of grip in the dirt, but they were not tubeless and that was not good for me. The Gravel King SK’s in the 40mm size were next. Relatively new to the market, they were tubeless ready and had very high volume, being over 40mms wide when mounted. I remember them being fast rolling and nice riding, but then other tires came along as testing duties called to me. 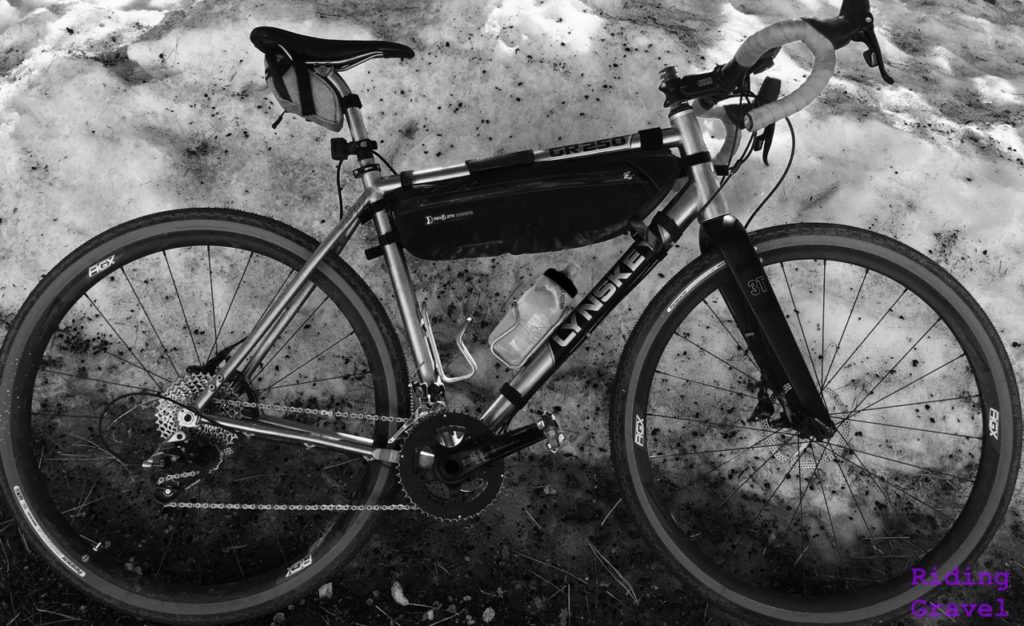 A while ago I was thinking about the SK’s again as I had noticed a ‘new’ 43mm size in the line as well as a 38mm version. I was intrigued. It was time for a refresher on the Gravel King SK’s. From the Panaracer website:

“Looking for a tire that’s more aggressive than the mixte-tread GravelKing? The GravelKing Sk might just be the tire you need for the more hardcore roads. Aggressive knobs, ZSG Natural rubber compound, puncture protection breaker and AX-α special low rolling resistance casing make the Gravelking a go-anywhere tire. And tubeless compatible up to 60 PSI!” 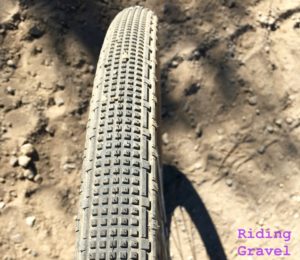 Now keep in mind that there are several tires with the Gravel King moniker, but some are more like slicks or are not tubeless. There is even an SK + with a beefed up casing for flat protection. We have the more ‘normal’ casing in tubeless and in both the sidewall colors. I have a set of the 43mm ones and a set of the 38mm ones. The 43’s are not a bigger version of the 40’s I tried before, but the new numbers reflect a correction in the labeling for the sake of accuracy. That makes it good for the rider as they can more accurately predict the fit to their bike’s frame. Basically the 40mm version was always bigger than 40mms, so why not just put that in print? Exactly. Well done, Panaracer. I weighed the 43’s at 503g/492g and the 38’s at 404g/407g. After a few weeks of being mounted tubeless, the 43mm version measured exactly 43mms wide at the sides of the casing. It has very little knobs as such, so the sidewalls are just about as wide as the tread.

The tread pattern is made of center rows of small blocks, 5 across in the 43mm version, that become two nearly continuous, long sections of tread at the very sidewall. It looks like it would be fast rolling. It is. It just rolls like there is no tomorrow and on smooth sections of pavement they make this high pitched ‘jet aircraft at altitude’ noise. Whiiiirrrrrr!!!. Very cool. Transitions to cornering are smooth and predictable. I can’t imagine anyone thinking these are not fast rolling enough on the tarmac unless your riding is biased >70% road. 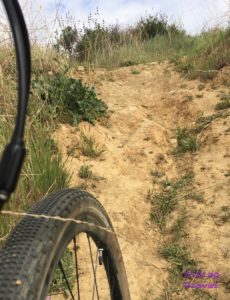 In the dirt I have been surprised at how tenacious they are. We have pretty dry conditions now, with little rain this winter. It’s been a dry So Cal spring. After using the WTB Ventures, which were like Velcro in the dirt but draggy on pavement, I re-mounted my stand-by WTB Resolutes, which are about the same size as the GK SK’s. I wanted to compare the SK’s to a tire I prized for its all-round-ness for So Cal use. I have to say that, except for traction in the most loose of conditions and perhaps over deep sand, the Panaracer Gravel King SK’s are a notch above the Resolutes.

On the road, they roll as well, likely better. I kind of expected that. But I was not expecting how much traction they would give off road, even on hard pack. Where the Resolutes can feel a bit ‘loose’ on hard dirt with a light overburden, the SK’s feel very hooked up. Not quite as stuck as the WTB Ventures, but not far off. Out of the saddle pitches where I was weight forward and driving, I had to try really hard to get the rear tire to break traction.

I ran them at no more than 40 psi and even down to 30 psi just to see how that was. It’s a big volume tire and that gives one a lot of grace as far as dropping air pressures and keeping the rims off the rocks. The ride is supple feeling and cracks in the road, potholes, etc, are muted. I did notice they are not quite as steady in deeper gravel or sand as the Resolute, but it is pretty close. Mud of course is an unknown for me, but I would not expect anything special there and I do not see this as a hardcore bike-packing tire, etc. They do offer the Plus casing with added protection, so if an aggressive tread is not called for, then that + version of the SK could be a great tire to point towards the horizon. (Editor’s Note: The Gravel King SK was tested here in Iowa and I can confirm that it does not have the best performance in mud. Here the Resolute is a bit better as well, using Grannygear’s ‘control tire’ as reference.)

The WTB Resolute (L) compares equally well with the Gravel King SK, with the SK’s getting the nod in overall speed.

The 38’s, as you would expect, are a narrower version of the 43’s. The tread is the same basic design, but they omit two rows of square center knobs to bring things in a bit. I measured them at 39.5 mms wide on a 21mm internal width rim and although my time was brief on these, they basically mimic the performance of the 43’s, spinning up a bit faster but giving up some off-road performance in looser conditions (less flotation). A fattish 38mm tire like these is a very compelling tire size for a lot of gravel riders out there. Is a 40mm wide tire the ‘perfect’ gravel bike tire size? Quite possibly.

At The Finish: This is a very, very, good tire for the way I use a gravel bike.  We are just a couple of years into the gravel scene where tires and what not have become specific to the genre, but even so the title of ‘classic’ can be used here I think. And the fact that the SKs have stood the test of time and still pretty much rock, shows that someone got it right from the beginning. The even more classic WTB Nano seems to be talked about in reverent tones, but I have found that tire to be pretty awful actually, doggy on pavement and odd feeling off road.
.
So some old stuff is just that…old.  There are golden oldies and moldy oldies.  The GK SKs are gold.
.
Note: Panaracer sent over the Gravel King SK tires for test and review to Riding Gravel at no charge. We were not paid nor bribed for this review and we always strive to give our honest thoughts and views throughout.
.

Grannygear hails from SoCal and spent most of his cycling days as a mountain biker from the formative years of mountain biking all the way up to the present day. His day job is in the tech sector, but he has spent time writing about off road 4X4’s, 29″ mountain bikes, and cycling in general. Grannygear and Guitar Ted have worked off and on together since 2009 after a chance meeting at Interbike. With gravel cycling on the rise, Grannygear has been exploring how this genre’ works in SoCal and now does guest pieces for RidingGravel.com in his spare time.
View all posts by Grannygear →